THE DELIGHT SONG OF TSOAI-TALEE

I am a feather on the bright sky
I am the blue horse that runs in the plain
I am the fish that rolls, shining, in the water
I am the shadow that follows a child
I am the evening light, the lustre of meadows
I am an eagle playing with the wind

posted by lotusgreen at 2:36 PM 2 comments

Haven't They Always Been Saints? 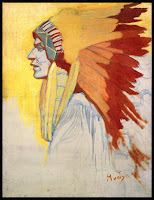 The recent announcement that Blessed Kateri Tekakwitha has been approved for sainthood is generating great excitement among the Native American community. “There’s an awful lot of interest,” said Monsignor Paul A. Lenz, the vice postulator of Bl. Kateri’s cause for sainthood. Msgr. Lenz told CNA on Jan. 19 that he has seen an “unbelievable response” to the news of the canonization, with reactions pouring in from all over the United States and Canada. Msgr. Lenz, who previously worked in the Black and Indian Mission Office in Washington, D.C., said that Native Americans are extremely excited about having a saint come from within their own community.

Known as “the Lily of the Mohawks,” Bl. Kateri Tekakwitha was born in upstate New York in 1656. Her father was a Mohawk chief, and her mother was an Algonquin who was raised Catholic. She was orphaned at age four by a smallpox epidemic that left her with poor eyesight and a badly scarred face. After encountering several Jesuit priests, Bl. Kateri was baptized, despite objections from her family.

Her conversion caused her tribe to disown her, so Bl. Kateri fled to Canada, where she lived as an outcast, devoted to prayer and the Blessed Sacrament. She died at age 24. After her death, witnesses said that the scars on her face disappeared, leaving her skin radiantly beautiful.

In 1980, she became the first Native American to be beatified. On Dec. 19, Pope Benedict XVI formally recognized a miracle attributed to the intercession of Bl. Tekakwitha, clearing the way for her canonization. The miracle involved a young boy in Seattle who was inexplicably cured from a flesh-eating bacteria that had disfigured his face and left him near death.

Msgr. Lenz said that the boy, who is of Native American descent, looked “worse than a leper.” However, he completely recovered after his family prayed and asked Bl. Kateri to intercede with God for him.

Msgr. Lenz explained that Catholic Native Americans have a strong faith and devotion to Bl. Kateri, whom they are familiar with from the Jesuit writings that have been handed down since the time of her death. In his 35 years of working with Native Americans, Msgr. Lenz has found that they are almost “always a friend” of Bl. Kateri Tekakwitha. “They’re very proud” of her, he said. (from)

But... wait a minute...! All of the notables here are pictured with halos, and for good reason.

By the Jewish calendar, we are currently in the holiday of Passover, where Jews celebrate with a ritualized dinner called a Seder. (The Last Supper was a Seder.) There is a word sung in a joyous song at the Passover Seder. The word is Dayenu and means “it would have been enough.” It is a word of gratitude and awe. 1 Dayenu lists the 15 gifts and miracles (like parting the Red Sea) bestowed upon the Jewish people by God in the Book of Exodus. The idea that each blessing would be enough on its own, even without further or more profound blessings, is a central theme during the holiday. 2

Looking back at the deserved sainthood of may generations of Native Americans, I think we can make a Dayenu for them easily.

If you had brought us seeds and foodstuffs in exchange for blankets of disease -- Dayenu!

If you had honorably tended your land and kept your faiths in the face of those who would steal both from you -- Dayenu!

If you had taught us to tap the Sugar Maple for her sweetness while your voices were silenced -- Dayenu!
You begin to see what I mean. May we all spend our Easter and Passover goodwill on tolerance and respect, perhaps the most difficult tasks any human being has to face.

posted by lotusgreen at 8:52 AM 8 comments