enough for any heaven 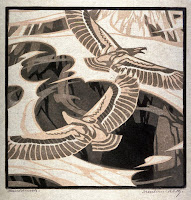 Who would have thought
the afterlife would
look so much like Ohio?
A small town place,
thickly settled
among deciduous trees.
I lived for what seemed
a very short time.
Several things did not work out. 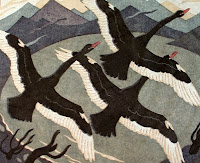 Casually almost,
I became another one
of the departed,
but I had never imagined
the tunnel of hot wind that pulls
the newly dead
into the dry Midwest
and plants us like corn. I am 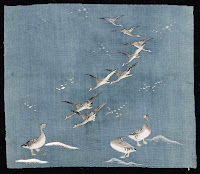 not alone, but I am restless.
There is such sorrow
in these geese, flying over,
trying to find a place to land
in the miles and miles
of parking lots
that once were soft wetlands. They seem 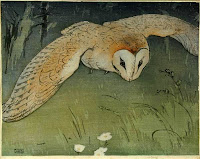 as puzzled as I am
about where to be.
Often they glide,
in what I guess is
a consultation with each other,
getting their bearings,
as I do when
I stare out my window
and count up

what I see. It's not much really:
one buckeye tree,
three white frame houses,
one evergreen,
five piles of yellow leaves.
This is not enough
for any heaven I had dreamed,
but I am taking the long view.

There must be a backcountry
of the beyond,
beyond even this and farther out,
past the dark smoky city
on the shore
of Lake Erie, through the landlocked passages
to the Great Sweetwater Seas.
Maggie Anderson

From A Space Filled with Moving, University of Pittsburgh Press. Copyright © 1991 by Maggie Anderson.
(the top image is from here)

posted by lotusgreen at 1:10 PM 4 comments

for what is already lost

and bounded
into the spruce grove.
Prebbles cove,
the beach of stones
glistening and smooth from the pummel of waves.

And I, who understand pounding,
wanted to walk into the sea, to rock there.

At the far edge of my life
on an island four hundred miles
from home, I lean against
an uncurtained window,
and all my grief

for what is already lost,
for what it may get too late to find,
jostles up against how much
I continue anyway to love the world.

I am tired of wanting to sleep beyond waking —
tired of the numbing that is no better than death,
But here on the sill,
stones oval as eggs —
blue, gray, black, 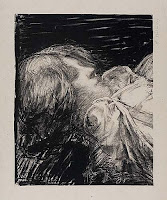 a whole row of them —
glow in the afternoon light
and here, across the meadow,
light enfolds even the least
small running creature.

posted by lotusgreen at 6:25 PM 4 comments

A German biologist says that efforts to clean oil-drenched birds in the Gulf of Mexico are in vain. For the birds' sake, it would be faster and less painful if animal-rescue workers put them under, she says. Studies and other experts back her up.

"Kill, don't clean," is the recommendation of a German animal biologist, who this week said that massive efforts to clean oil-soaked birds in Gulf of Mexico won't do much to stop a near certain and painful death for the creatures.
Despite the short-term success in cleaning the birds and releasing them back into the wild, few, if any, have a chance of surviving, says Silvia Gaus, a biologist at the Wattenmeer National Park along the North Sea in the German state of Schleswig-Holstein.

"According to serious studies, the middle-term survival rate of oil-soaked birds is under 1 percent," Gaus says.
"We, therefore, oppose cleaning birds." 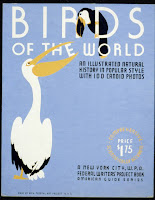 In the path of the spill are several large protected areas for wildlife, including a vital nesting area for thousands of brown pelicans which were only removed from the US Endangered Species Program last year. Louisiana's Breton National Wildlife Refuge is by itself home to 34,000 birds. So far, the vast oil slick has yet to make significant landfall, limiting the numbers of birds affected, but observers worry that it is only a matter of time before beaches along America's Gulf Coast become blackened.
Birds Will Eventually Perish from Long-Term Causes 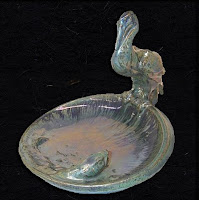 Catching and cleaning oil-soaked birds oftentimes leads to fatal amounts of stress for the animals, Gaus says. Furthermore, forcing the birds to ingest coal solutions -- or Pepto Bismol, as animal-rescue workers are doing along the Gulf Coast -- in an attempt to prevent the poisonous effects of the oil is ineffective, Gaus says. The birds will eventually perish anyway from kidney and liver damage.

Gaus speaks from 20 years of experience, and she worked on the environmental cleanup of the Pallas -- a wood-carrying cargo ship that spilled 90 tons of oil in the North Sea after running aground in October of 1998. Around 13,000 birds drown, froze or expired due to stress as a result of the Pallas spill.

Once covered in oil, a bird will use its bill and tongue to remove the toxic substance from their feathers. Despite oil's terrible taste and smell, a bird will still try and clean itself because it can't live without fluffy feathers that repel water and regulate its body temperature. "Their instinct to clean is greater than their instinct to hunt, and as long as their feathers are dirty with oil, they won't eat," Gaus says.

Kill Them 'Quickly and Painlessly' 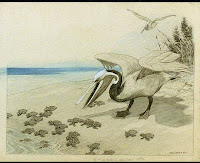 But it's the instinct of biologists, who often feel compelled to save the birds out of duty and ethical reasons, that will ultimately lead a bird to a worse death,say some. It would be better to let the birds die in peace, Gaus says, or kill them "quickly and painlessly."
Even dyed-in-the-wool preservationists from the WWF agree with Gaus. At the time of the 2002 Prestige oil spill off the coast of Spain, a spoke- sman from the organization said: "Birds, those that have been covered in oil and can still be caught, can no longer be helped. … Therefore, the World Wildlife Fund is very reluctant to recommend cleaning."

The Prestige spill killed 250,000 birds. Of the thousands that were cleaned, most died within a few days, and only 600 lived and were able to be released into the wild. According to a British study of the spill, the median lifespan of a bird that was cleaned and released was only seven days.

posted by lotusgreen at 4:51 PM 6 comments

the road from impressionism to cubism leads directly through ecstasy 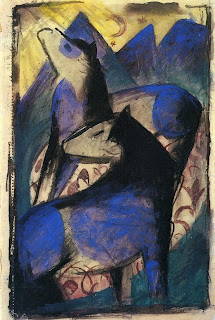 I’d been traveling all day, driving north
— smaller and smaller roads, clapboard houses
startled awake by the new green
around them —

when I saw three horses in a fenced field
by the narrow highway’s edge: white horses,

two uniformly snowy, the other speckled
as though he’d been rolling in flakes of rust.
They were of graduated sizes — small, medium,

large — and two stood to watch while
the smallest
waded up to his knees in a shallow pond,

tossing his head and taking
— it seemed unmistakable —
delight in the cool water
around his hooves and ankles.
I kept on driving, I went into town 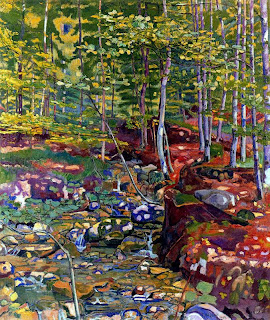 to visit the bookstores and the coffee bar
and looked at the new novels
and the volumes of poetry, but all the time
it was horses I was thinking of,
and when I drove back to find them,
the three companions left off
whatever it was they were playing at
and came nearer the wire fence —
I’d pulled over onto the grassy shoulder
of the highway — to see what I’d
brought them.
Experience is an intact fruit,
core and flesh and rind of it; once cut open,
entered, it can’t be the same, can it?
Though that is the dream of the poem:
as if we could look out 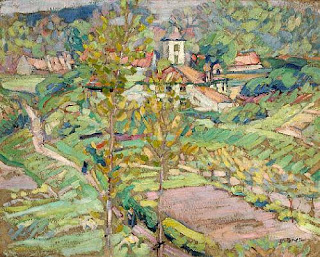 through that moment’s blushed skin.
They wandered toward the fence.
The tallest turned toward me;

I was moved by the verticality of her face,
elongated reach from the tips of her ears
down to white eyelids and lashes,
the pink articulation
of nostrils, wind stirring the strands
of her mane a little to frame the gaze
in which she fixed me. She was the bold one;
the others stood at a slight distance
while she held me in her attention.
Put your tongue to the green-flecked peel 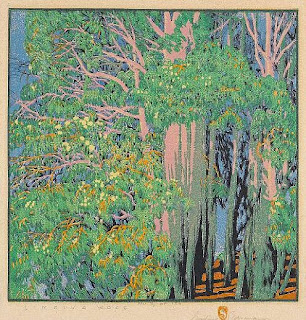 of it, reader, and taste it
from the inside: would you believe me
if I said that beneath them a clear channel
ran from the three horses to the place
they’d come from, the cool womb
of nothing, cave at the heart
of the world, deep and resilient and firmly set
at the core of things? Not emptiness,
not negation, but a generous, cold nothing:
the breathing space out of which new shoots

are propelled to the grazing mouths,
out of which the horses themselves
are tendered
into the new light. The poem wants
the impossible; 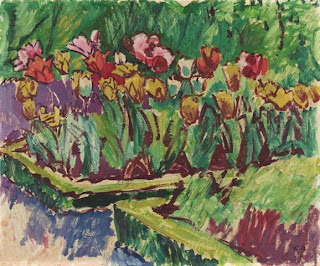 the poem wants a name for the kind nothing
at the core of time, out of which the foals
come tumbling: curled, fetal, dreaming,
and into which the old crumple, fetlock
and skull breaking like waves
of foaming milk....
Cold, bracing nothing that mothers forth
mud and mint, hoof and clover, root hair
and horsehair and the accordion bones
of the rust-spotted little one unfolding itself
into the afternoon. You too: you flare

and fall back into the necessary
open space. What could be better than that? 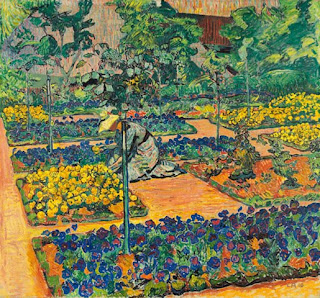 It was the beginning of May,
the black earth nearly steaming,
and a scatter of petals decked the mud
like pearls, everything warm with setting out,
and you could see beneath their hooves
the path they’d traveled up, the horse road

on which they trot into the world, eager
for pleasure
and sunlight, and down which they descend,

in good time, into the source of spring.

posted by lotusgreen at 6:14 PM 0 comments