lauren asked in a previous post: I really love all of the cross cultural comparisons. I was looking at Impressionist painters today, and I was wondering if you know of any works by Japanese artists that compare to Degas' paintings of ballerinas... 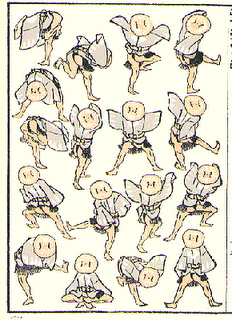 thanks so much for asking, lauren. what i've seen suggested is that degas is doing with these, to some extent, what hokusai was doing in his manga (sketchbooks) -- illustrating movement, playing with bodies from different angles, etc. i'll add to that the fact that you are getting the 'elongated canvas,' almost screen-shaped, along with that diagonal leg creating separate, asymmetrical, portions of the whole. i'm currently looking into the introduction to the west of this from, as well as the scroll form; watch this space. 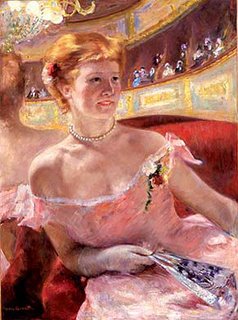 ...Mary Cassatt's "Woman With A Pearl Necklace In A Loge"...

mary cassatt's paintings didn't really reflect her love of the japanese style in the way her prints did. i've mentioned her series of mothers with infants, so strongly influenced by utamaro's similar series (which she collected), 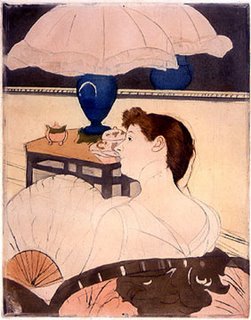 but i thought this was interesting too: 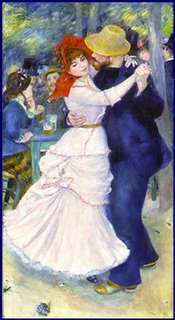 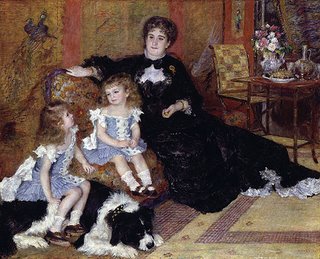 after painting madame charpentier and her children with both a japanese screen and a scroll on the wall behind them, renoir decided he hated this whole 'japonisme' thing. it was too popular, there were too many imitators, too much kitsch. it was on posters for bicycles, for goodness sake!

he decided he hated his own painting, and never followed that trend again.

posted by lotusgreen at 5:04 PM 0 comments 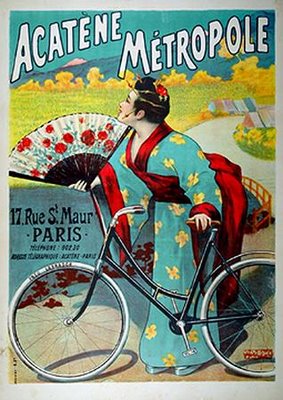 two things were all the rage in the late 1890s. can you find them both in this poster?

i just never noticed how often bijin (beautiful women)
are pictured in that same pose!

posted by lotusgreen at 8:20 PM 4 comments 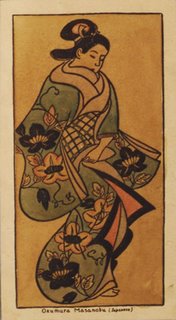 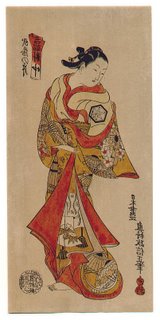 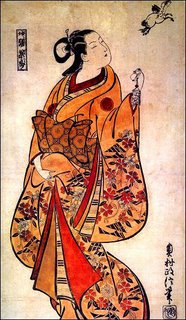 although dow was known to be one of the few western artists to both so fully embrace japanese design principles while at the same time making them his own, they became his own 'voice,' he obviously did some 'copying' for learning's sake, much as van gogh did.

(masanobu okumura: the third image is entitled 'courtesan,' i don't have a name for the left one, but the middle is dow's, and is clearly labeled with nasanobu's name. i don't know that either of these others are what he was working from, but on all three, look at the one hand holding the kimono closed, the bottom of the kimono opening in similar ways, and the full sweep of one arm of the kimono.)

posted by lotusgreen at 6:48 PM 0 comments

arthur wesley dow grew up in ipswich, massachusetts, which he ended up memorializing in woodblock prints and paintings. 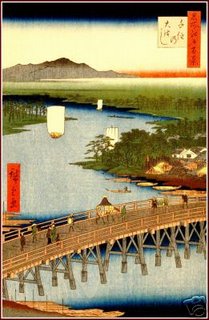 having gone to paris to continue his art education, and to learn from other painters, dow eventually returned to ipswich somewhat disillusioned. though he had learned something about 'plein air' painting (the essential underpinning of impressionism), he felt dissatisfied.

in france, however, like everyone else at that turn of the century, became aware of the arts and
crafts of japan. when he
returned he continued, and intensified, his interest--so much so in fact that he was made assistant to ernest fenollosa in the asian art department of the mfa boston.

this study, and a long trip to japan revolu- tionized how dow thought about art, design, media.... and not only did it revolutionize his own work, but those of subsequent generations as dow began to teach, and his students began to teach, and so on. 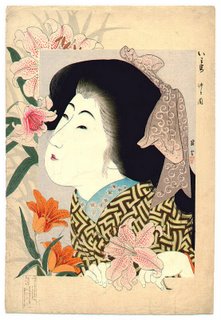 follow- ing precepts he had gath- ered from long study of japanese art, asian concepts of space, balance, clarity, and simplicity became known as what he did, and what he taught.

posted by lotusgreen at 1:04 PM 0 comments 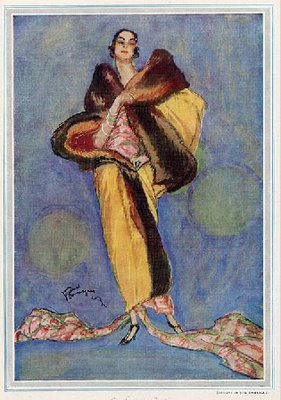 once the sight of women in kimono inspired western women to toss their corsets, clothing designers invented the 'hobble skirt,' which occasionally was augmented with something to bind the knees or ankles. these were embraced as a way to make it easy for women to take tiny small steps.... like the geisha....

posted by lotusgreen at 7:45 PM 0 comments 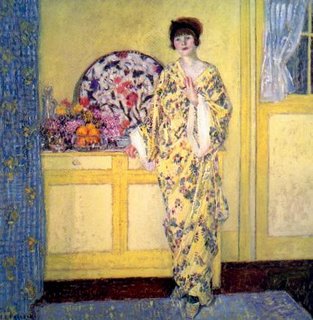 'the
yellow
kimono'
by
frieseke

while it seems
that
the majority
of kimono
and
kimono-
inspired 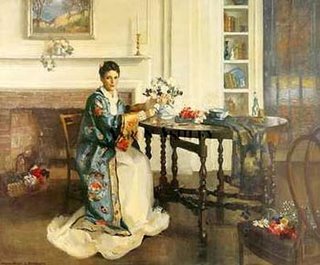 'the
blue
kimono'
by
pearson

clothing to
be found
in the west,
in paintings,
clothing, 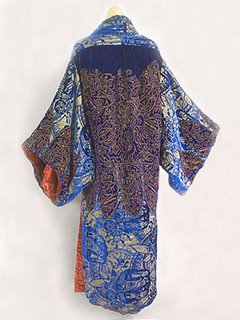 
or designs,
seems to be
blue
or yellow, 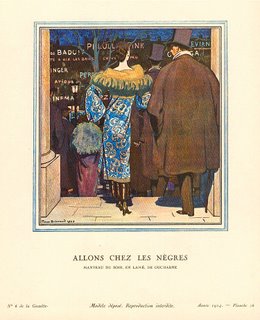 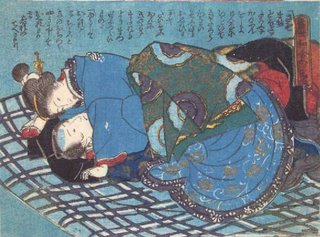 'the
blue
futon'
attributed
to
kunisada


in the robes
of the men,
not the
women. posted by lotusgreen at 4:21 PM 5 comments

at the time of shakespeare

this screen, credited to matahei by ernest fenollosa was considered a national treasure and was sent to the exhibition of 1900 in paris by the japanese government.
fenollosa was a friend of morse's and was called to japan by him. in 1911 he wrote about the screen in epochs of chinese and japaense art. more about him later, but i think his descriptions of the 'hikone screen' illuminate the screen as well as the culture as much as its background of gold.

"[the screen] represents graceful figures of men and girls and children in rich colors upon a gold ground, seated upon the mats in utterly unrestrained japanese attitudes. in the center of one screen an old blind musician is giving a lesson in samisen-playing to two girls, while a party of young people nearby play a game of go. behind those two groups a beautiful landscape screen, evidently by kano motonobu, is unfolded. another group shows us all slender girls walking, while a gay young samurai leans in a most unconventional attitude upon his long sword. this shows us a tendency to dissipation that may well become the degeneration of the whole buke class*, if not checked...."

two more gold-backed screens by this artist are known.

fenollosa places all of these works in the early 1600s, about when shakespeare was working continents away.

i believe it is of someone in these two that fenollosa says, "...the lines of the young girl seated upon the bench with withdrawn knees are among the most graceful in all japanese art."

some credit matahei with having been the founder of the ukiyo-e school of painting, but some credit others. this kind of thing happens a lot.

* he was right. the bukes were the samurai.

posted by lotusgreen at 8:55 AM 0 comments 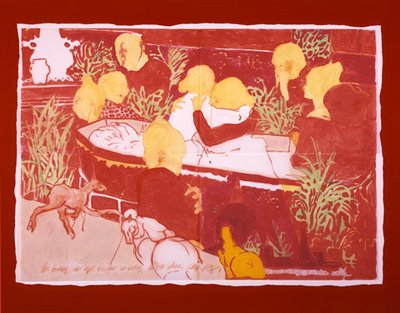 (jerry saltz is art critic for the Village Voice,
where this review first appeared.)

posted by lotusgreen at 3:33 PM 2 comments 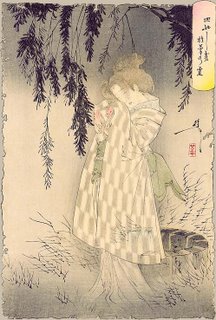 in the kabuki play Bancho Sarayashiki, Okiku is a maid at the mansion of the Japanese samurai Tessan Aoyama. The samurai wants to seduce the lovely girl but she rejects his advances. Aoyama uses a trick. He hides one of ten valuable Dutch plates and threatens Okiku to make public that she had stolen the plate unless she agrees to become his mistress. In her desperation Okiku throws herself into the well and drowns.

Okiku's ghost comes out every night, counting from one to nine and then breaks out into a terrible howling and sobbing. Finally Aoyama goes insane by the daily apparitions at night. on the right is her ghost, as depicted by yoshitoshi. 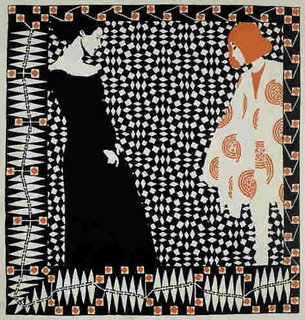 the one on the left is by koloman moser, a founding member of the vienna secession. it is an illustration for rilke's poem,

hesitantly, reach toward the earth
from space, and country lanes are showing
these unexpected subtle risings
that find expression in the empty trees.

i couldn't find another translation. also, not really sure how the illustration relates to it. anyone have any ideas? moser said the one in black and white is the duchess, a character in the poem. ??? i could find no other rilke poem about spring. as always, all commentary is welcomed. 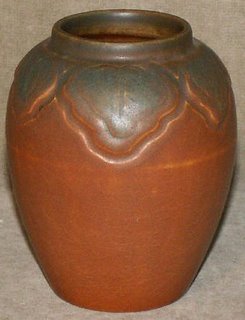 "rookwood pottery was founded in 1880 by marie longworth nichols. 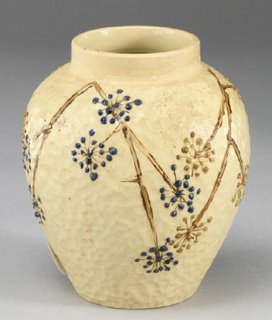 they mastered such diverse styles as victorian, art nouveau, arts and crafts, and art deco."

posted by lotusgreen at 8:56 PM 0 comments 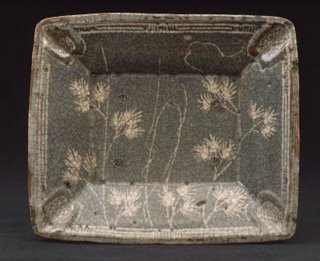 each of these pieces of pottery are listed with their provenance as saying:
purchased by edward sylvester morse in japan between 1877 and 1892. deposited to the mfa boston in 1892.

morse, who found shards of pottery in the 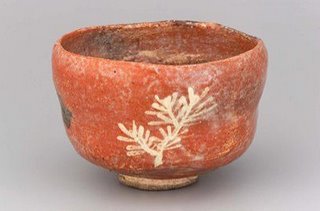 shellmound along with the brachiopods, eventually collected, classified, and catalogued over 5,000 ceramic items during his visits to japan. he became known as “the father of japanese archaeology.”

as geocentric as that sounds, you have to understand 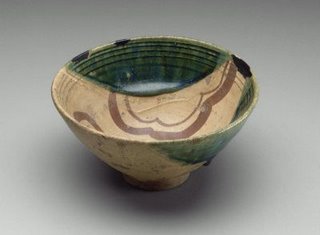 that in fact the japanese themselves did not collect or value this work. morse purused the entire country, explored sheds with piles of the stuff in the cobwebby corners, awaiting trash day, and began to notice the different techniques in different parts of the country.

yes, though he was instrumental in both creating the museum for showing this work, and for advocating what eventually became law, that these artifacts could no longer be exported, but not before he had himself exported what appears in the boston mfa today.

to this time, the japanese had not distinguished between "art" and "craft."

posted by lotusgreen at 6:30 PM 0 comments

edward morse got into a lot of trouble as a kid. he was thrown out of every school he attended, and occasionally punished harshly in the process when he, for instance, carved up his desk.

this gave him great freedom to roam the country sides and sea shores of maine, which is what he really wanted to be doing anyway. his discovery of a previously unknown species of snail (tympanis morsei) caught the attention of his elders and he was soon mentored and taught by the best of them.

in 1877 he decided to challenge himself with the largely unexplored seashores of japan. while he was looking fro brachiopods, he found much more as well--a more extensive archeological site, the omori shell mounds, than had been found to that date. 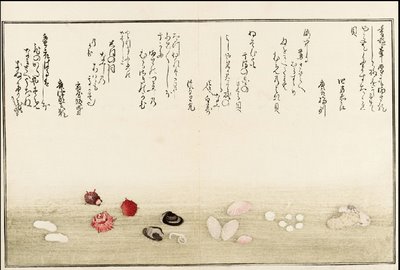 morse's success with both the zoological and the archeological fields in japan were rewarded with laboratories and professorships and as his information became more and more trusted, he was often asked to recommend other teachers from the west. together they set up programs for which the japanese were clamoring: zoology, archeology, sociology, biology, and even darwin.

his work in organization of the japanese imperial museum tied together many facets of his life, which i'll cover in part two.

(this wonderful utamaro print of shells is part of an extraordinary exhibit at the new york public library about japanese artists' books. this one was a collaboration of poets and the artist. many thanks to fade theory for the pointer!)