three painters, actually, to be discussed sequentially, all three passionate, intense, and deeply spiritual men. the reason i've called him far- sighted is firstly because of his propensity, in landscapes, to sharpen most those distances far away. whether or not this idea fords a psychological meaning, i don't know, but it's an interesting thing to ponder.


but far-sighted too because in his work one might view more than what one sees. the extraordinaryness of these landscapes almost insists we look at these paintings not only with our eyes but with our hearts and minds as well, as they were painted. 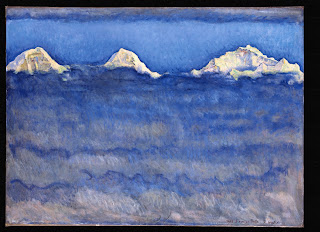 "His philosophy imbued his art with a kind of mysticism... As related to landscapes, Sotheby's Swiss art expert Urs Lanter captures this almost Taoist feel when he says: 'Hodler didn't just paint Alpine landscapes, he captured the essence of mountains.'" 1

At one of the last Berlin exhibitions there was a room which was given up to the works of Klimt, and next to it another set apart for the Swiss, Ferdinand Hodler. In the Klimt room one breathed the close atmosphere of a Viennese salon, or, to me at least, of a harem pervaded by an intoxicating, sensuous odour of Oriental perfumes and bare shoulders. There spoke an artist, who from the treasure-houses of by-gone cultures chose out the most precious, the most unique forms he could find, in order to build up with these fragments, of a long-past age of beauty and refinement, a world of his own, artificial, Faded, falling into decay, but still a fascinating world. 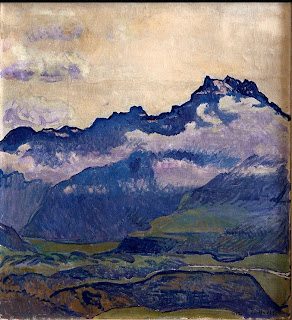 Passing to the Hodler room, one inhaled the sharp, ice-cold air of the Alps. There one met a veritable child of nature in all his untamed, almost brutal strength. As we shall not have an opportunity elsewhere for an appreciation of Hodler, a few words here may not be out of place. In a work which deals with the history of art it is practically impossible to devote a separate chapter to the consideration of Switzerland, that tiny country that has opened its doors on all sides to foreign culture. 2


hodler's own words show his intent: "The physiognomy of landscape in painting depends on the emotional elements of the landscape, that is, the impressions it awakens within us... The landscape must have a character, express a passion or an emotion... The painter must have the will to be clear and the capacity of rendering frankly and without hesitation his own feelings. Only then will the painted landscape grip the spectator without fail and convey to him a deep and lasting impression. 3 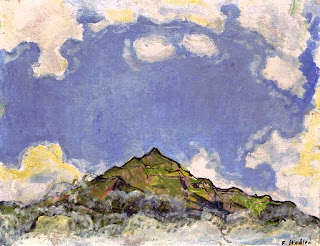 around 1875, hodler wrote his 'painter's decalogue,' revealing, to my eyes, an early decon- struction of japonisme. it includes, among others, these obvious suggestions:

"The painter must practice seeing nature as a flat surface." and "The outline constitutes an expressive feature and an element of beauty in itself. It constitutes the foundation of all later work and therefore must be strong and accurate." 3 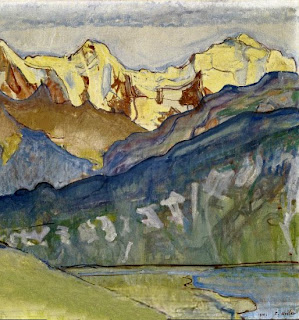 and yet a friend of the painter, louis duchosal, dedicated a poem to him, it told a different story:

If I had my life an hour,
but one hour, In which this heart, groaning at the lightest touch of breath,
Had enjoyed one pleasure, however fleeting,
For that furtive moment, for that brief joy,
I would go my way again, less sad and more spirited,
And, drawing hope from this pleasant recollection, I would say to my heart: "Be of good cheer, all will end! "
But I question in vain the horror of my memory.
At every page, in the bitter book of my history,
One word rises up like a red flower Misfortune! - And then Misfortune! - And again Misfortune! 4 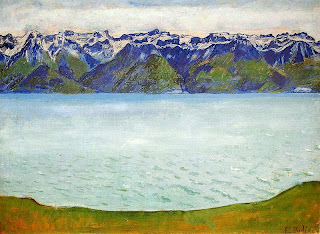 three painters, i said..." perhaps a brief look at the other two, one -- a portraitist, and then two -- surrealist. interestingly, though he had written, "If the painter wants his picture to be moving and striking, he will not use figures," 3 the other two of hodler's artistic personnas were involved almost wholly with 'figures,' often to the total absence of anything else. and thereby revealed even more of himself than he revealed whom he painted. 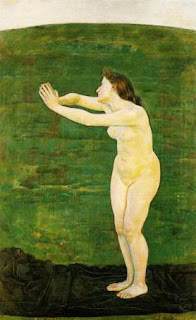 in this piece of hodler's surrealist work, every muscle of this woman is carefully controlled so that upon viewing her, one can almost translate her as though she were pure language.

"artist Paul Klee, another Swiss painter, wrote in 1911 that Hodler 'can create the soul by painting the body, better than anybody'." 1 in this, hodler's purposeful revelations of the soul of landscape are clearly related. 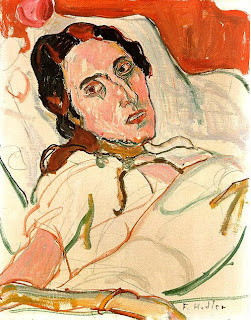 Famous in Munich, Berlin, Vienna and Paris, Hodler was 55 when he met Valentine Gode-Darel, an independent woman unlike any of his acquaintance. He fell passionately in love with her, and in 1913, five years after they met, a daughter, Paulette, was born.

Tragically, Gode-Darel was diagnosed with cancer in 1914.

As she made her slow, agonising way towards death between December 1914 and January 1915, Hodler sat by her bedside and created some 200 works of his beloved. The result is known as the Valentine Cycle, a meditation on death that the Musee d'Orsay, in documentation accompanying its major Hodler retrospective, calls "unparalleled in the history of art." 5 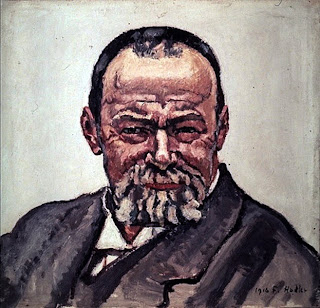 
far-sighted enough to be, well, un-understood:

"If Hodler told in his easel pictures what he might have well said as a monumental painter, if he divested his easel picture of all refinement to show thereby that when placed before a mighty wall he knew how to work in the lapidary style of an al-fresco artist, that does not in the least alter the fact that his works in the exhibitions look crude and unsatisfactory. Hodler's mishandling of colour spoils even the composition of his pictures." 2

perhaps all far-seeing predicts two outcomes: seeing, and seeing through, two aspects of life that many seem to spend all of their time trying to avoid.

posted by lotusgreen at 1:00 PM 4 comments