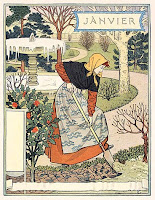 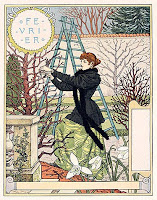 Among those most deserving to be signalled out in an essay of some length is Eugene Grasset, whose recent exhibition of work displayed so rare a talent as to assign him a place in the first rank of those who strive to become innovators, and to point out the road for others to follow. Aesthetes and those who look about for original work were last summer united in a common enthusiasm at the Exposition de Cent, organised by a young school of artists and literary men whose acknowledged mouthpiece is the journal La Plume. 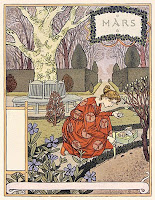 When confronted with the extraordinary versatility of his style, the infinite contrast in his conceptions, applied as they are to everything that can contribute to the decoration of our houses, everyone ignorant of the existence of this modest and painstaking artist was struck with astonishment. It is easy to understand their amazement, because Grasset proved that he was endowed with talent in the triple character of scholarly illustrator, skilled architect, fantaisiste and brilliant decorator, one who was quite as clever at the composition of cartoons for tapestry as at realising the combinations possible in textile fabrics, lace and furniture. 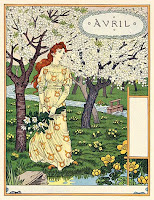 Grasset revealed himself to us as an illustrator about ten or twelve years ago, when there appeared one of the most beautiful books of the century, It is here, among these pages, at once so elaborate and so lucid, that one can appreciate the apostle of new conceits, new styles of ornament, never before given to the world, but dug out of some decorative botany that is still unpublished. 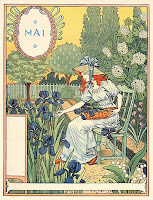 Although at first sight one would think that Grasset has consciously bowed to the influence of the Japanese, the Hindoos, or Persians, and assimilated in a vague way some of their methods, one has only to exercise one's criticism with greater perspicacity and observation to realise the mistake based on first impressions. It is from the study of rural life, from the grouping together of oft-repeated sketches, from the soundness of his taste mellowed by work, and from the contemplation of nature, that he has distilled the best part of his originality and talent. 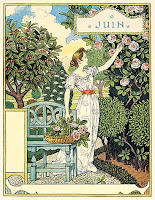 A slower moment was a golden opportunity to thoroughly master different styles. It was then that he realised how his talent should be exercised; in the evenings he attended an academy for a course of drawing ; he familiarised himself with Japanese art, dipping into the encyclopaedias of Hokusai and Utamaro, or the works of the master-illustrators of Nippon; in studies and conscientious observation, that nature is the great teacher, the true educator, but that the mission of the true artist is less to copy than to express and interpret her; to metamorphose her by making her pass, so to speak, through the alembic of an individual temperament. 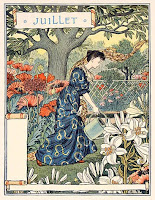 His insight was, as it were, doubled by his desire to master everything and know everything. His predilection for the occult in respect to apparitions equals that of a Japanese artist, for he recognises the element of terror in the phantasmagoria of hallucination ; and imparts a frisson nouveau (new shudder) into compositions of this kind. And I believe that in illustrating a book from the unscientific point of view, Grasset would give us a something unusually creepy. 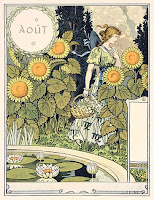 For several years past this great artist, with the deliberation of a thinker and philosopher, has lived a retired life in Paris in his studio in the Boulevard Arago, indifferent to all flattery. There, with his beautiful work about him, I have learned to know and honour him, and have held him in the greatest affection. His life is solitary, for solitude only admits of any real work, engendered gradually, and matured in an environment of that silence so favourable to pregnant minds. Impervious to the theories of painter-cliques, or of men of the day, careless of fashion, without vanity of any kind, he seems to hide his personality with as much care as he does his works, with which he never allows himself to be satisfied. In spite of his reputation as a craftsman not often pressed to hand over a design "copyright free," Grasset has thrown into all branches of industrial art the spirit of a commanding personality. 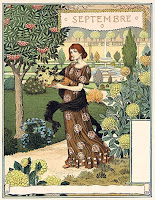 His cartoons for stained glass are, numerically speaking, quite extra- ordinary; his posters, his chromo-typography, his catalogue and book- covers, his tapestry panels, his designs for furniture of all sorts, his architectural work, his lithography, his innumerable decorative works, might furnish material for an iconography far more important than we would think. Among his principal achievements, his glass ware and stained windows do him the greatest credit, and those aerial transparent paint pervading his compositions, but to his care in selecting beautiful iridescent glass, shimmering, striated and rich in tone, all of which he knows how to arrange. 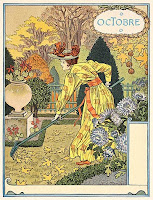 This portion of his work is assuredly the most beautiful and elevated, because, as M. Arsene Alexandre, a discerning critic, has judiciously remarked, "Grasset, without shirking the strict limitations of the craft, on the contrary revels in them, and manages in these stained windows, by the means of the lead lines, to produce perfectly legitimate surprises due to broad original experiments, and to his steeping himself with colour and light. Moreover, like every true decorator, he has taken care to appreciate when and how Nature's colours lend themselves to transposition in the harmony of a composition. What matter if a sky be green, trees red, coursers and animals of mystic forest blue, running water a yellow sulphur tint, if the general effect of the fresco is enveloped in a pleasing atmosphere of gradations, and produces a startling unearthly impression. 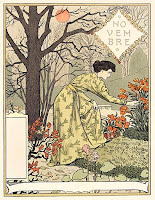 Nature is synthetic in her colouring ; she never guarantees more than three tones—the tone of background, the tone of light, the tone of shadow. Such and such a plant, flower, or object only betray their true colour under atmospheric conditions when the light strikes from above, as is usually the case. To endow them with artificial colour, to transpose the value of backgrounds, shadow, and light should be the supreme achievement of decoration. The masters of all countries and all times have never acted otherwise, and our most celebrated tapestries charm us by the fantastic and agreeable unreality we detect in them. 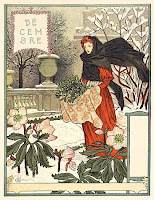 It is one of Grasset's strong points that he has understood these things, and he has applied his principles with great courage to the execution of his works; for him the search for the beautiful does not cease to be the longed-for goal; he takes lessons from the past, and from exotic decorators new impressions ; but from Nature alone he claims inspiration. In the domineering and banal eclecticism of these days, it is fortunate that our decorative art can still boast a few artists of Grasset's vigorous calibre —artists who enable us not to despair of the future. 1

the calendar is from around 1895

posted by lotusgreen at 5:11 PM 0 comments