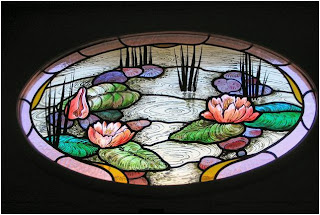 many european art nouveau treasures were were spared destruction in WWII (as was kyoto); 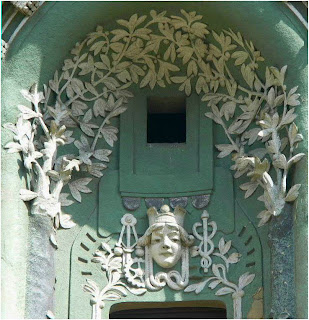 many have been restored; 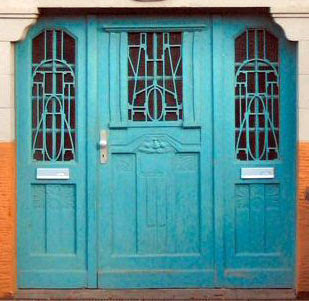 many are still threatened; 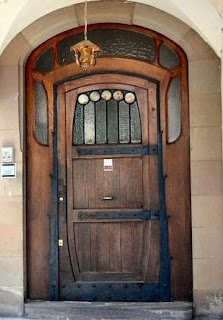 we appreciate them as we can. 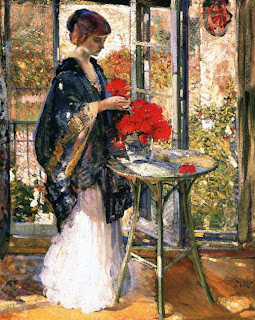 i started off thinking today's post was going to be about one thing, and it turned out to be another. i'll see how including both does....
i began with this beautiful painting by richard emil miller. i had seen it in a book about a travelling exhibition of american impressionists put together by the smithsonian. it touched me deeply with it's capture of the moment, the light, reflections, her concentration. and of course the kimono. 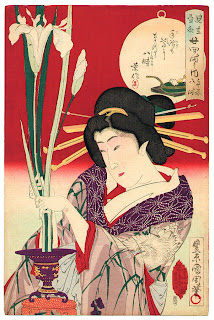 i then came by this print by kunichika toyohara. it's from his series 'twenty-four hours in the life of a courtesan.' i then learned that kunichika, like many japanese artists, really liked to do series. a few of his many additional ones include "32 fashionable physiognomies,' 'Thirty-six good and evil beauties,' 'Popularity of the upstairs dressing room,' and 'Thirty-six modern restaurants.'1 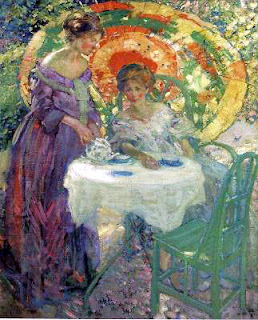 after looking up kunichika, i looked up richard miller, the artist of the first painting, who, as it turns out, was yet another american who went to giverny and painted with the dappled light, strong patterning, and diagonal compositions that many of the japan-influenced impressionists were using.2 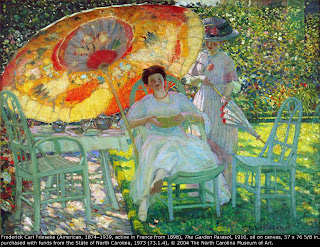 in another post, i pointed out similarities in the work between guy rose and frederick frieseke -- well, let's add richard miller, and numerous other artists who lived in giverney at that time, including lawton parker and others. 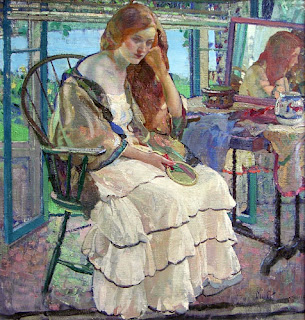 in fact, it turns out they all painted frieseke's wife, wearing that little wrap, and painted other things with astonishing similarity.

posted by lotusgreen at 1:16 PM 2 comments 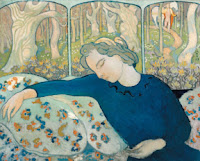 I believe that Art should sanctify Nature; I believe that Vision without Spirit is futile; and the mission of the aesthete is to erect things of beauty as imperishable icons.

From the age of fourteen, Maurice Denis recorded in his Journal his ardent desire to be a Christian painter. At the Lycée, he met Vuillard and Roussel, and at the Académie Julian, he became friends with Bonnard, Ranson and Sérusier. These young artists, who shared the same ideas about creating a synthetist, idealistic kind of art, founded the group called the Nabis, from a Hebrew word meaning “prophet.” Their aim was to render in comprehensible signs the inexpressible ideal, the secret language of God, of love and emotion. Denis, dubbed “the Nabi of the beautiful icons,” became their spokesman and theorist. His striking Easter Procession, a mystical symbolist painting, shows “figures of the soul” wandering along the “path of life” in search of their vocation, through the wavering blue shadows of a sacred grove. In the distance, nuns kneel before an angel who is guiding them along the way toward their calling.

The Poetic Arabesques of Art Nouveau

To start with, the pure arabesque, as plain as possible; a wall is empty: fill it with symmetrical brushstrokes of shapes in harmonious colours (stained glass, Egyptian paintings, Byzantine mosaics, Japanese wall hangings).

Anticipating Art Nouveau, Denis wanted to rethink the interior decoration of the “modern house.” Ladder in the Foliage, designed for a ceiling, was the first of many large-scale decorative paintings. He also created patterns for wallpaper and designs for stained glass, tapestries and ceramics. Posters, books, fans and even blinds became vehicles for incorporating art into everyday life, transcending the distinction between architecture, writing and painting. 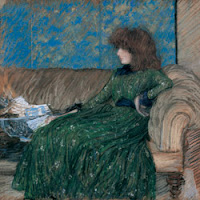 Remember that a picture – before being a war horse or a nude woman or an anecdote of some sort – is essentially a flat surface covered with colours assembled in a certain order.

Together with his fellow Nabis, Denis opened up a new direction for Post-Impressionist modernism, taking his inspiration from the painting of Gauguin and Van Gogh and making the picture, rather than the subject, the priority. The maxims of this bold new generation were violent colours, simplified shapes and emphasis on line – an approach that Matisse and the Fauves would embrace, too. Denis, even more than Bonnard or Vuillard, took his famous precept to the limit in his small paintings, often executed on simple pieces of cardboard, as in this Sunlight on the Terrace. With its emphatically decorative impact, this little experimental landscape, now famous, is really a covert flirtation with the abstract.

For Love of Marthe

Our two souls leaned towards each other in a slow movement. I was sad that I could not weep; she was so infinitely beautiful. Mysteries were being celebrated in the velvet depths of her eyes, and I was unworthy to witness them.

The gentle, affectionate Marthe, the artist’s wife and muse, was to give him seven children and the joy of family life. His art, inspired by love, portrayed her as the Wise Virgin in a Garden, the Princess in a Tower, the Woman Asleep in the Enchanted Forest, the triumphant Mother and the Italian Madonna. Marthe at the Piano is a young man’s declaration of love to his sweetheart, symbolized by a bouquet. They had the same tastes in music (Marthe was a gifted musician) and in avant-garde literature and theatre – the reference here is to the playwright Maeterlinck. Their friends included the composers Debussy, Chausson and Vincent d’Indy and writers Mallarmé, Valéry, Gide and Claudel.

Italy and the “Return to Order”

The classical methods, which best display the artist’s good faith and commitment by ennobling them, nevertheless tend to diminish the expression of his own emotions and personal taste. His originality is obscured and, as it were, disappears in the breadth and perfection of the formula.

In 1898, Denis’s friend André Gide had shown him the beauties of Rome. The artist had previously illustrated Gide’s Le voyage d’Urien, an indispensable book for contemporary bibliophiles (our exhibition shows several of the little-known drawings for this book). Convinced that the way forward for modern art was to return to classical order, from this period onwards Denis sought to impose on his work a new concern for order and discipline. A whole generation was to follow his lead in seeking new solutions, including Picasso in the postwar period and Le Corbusier in La leçon de Rome. Henceforth, Denis continued to revisit Italy, still his favourite destination despite many other trips abroad, including a few days (and three lectures ) in Canada in 1927.

A Time of Harmony 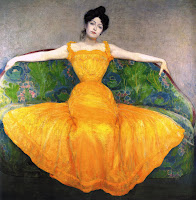 At Perros, Silencio. It is striking how appropriate the house is to my life, made up as it is of my children, painting, the beach and my studio. And then there are the woods, and lastly solitude, and the most beautiful sunsets.

Brittany, a traditional region that inspired many French primitivist artists, was Denis’s favourite place for summer vacations. At Silencio, the house in Perros-Guirec that he purchased in 1908, he created an Arcadian existence. September Evening celebrates his daughters playing happily on the beach and Marthe nursing their first son. This very modern seaside holiday scene, bathed in the golden light of sunset, becomes a timeless family idyll.1 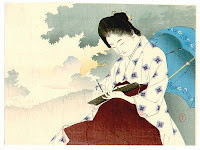 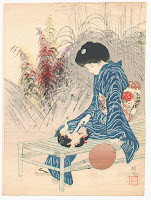 posted by lotusgreen at 4:13 PM 1 comments

lest we forget II 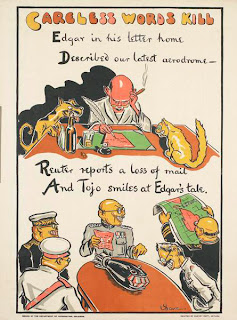 Problems arose for our people almost as soon as we arrived. In 1900, the mayor of San Francisco described us as completely inassimilable. The Issei, who were the first generation of immigrants that came to America had the hardest time fitting into society but began the basis of community that made things easier for each successive generation. When we tried to enter our children into the schools the people of San Francisco feared that we would flood the public schools with ignorant foreigners. In 1905 California newspapers campaigned against our potential threat to public schools calling it, "yellow peril". Both houses of the California legislature passed resolutions calling for the exclusion of our peoples on the grounds that we were unable to assimilate.

Furthermore, in 1908 President Roosevelt meet with Japanese officials to form the Gentlemen’s Agreement. This doctrine called for no new passports to be given to any more of our people outside of those who had already arrived here. This was an attempt to reduce the number of our people allowed to immigrate. 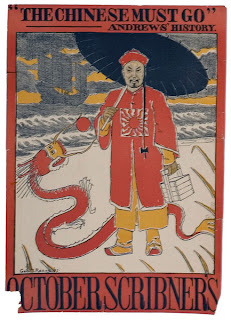 The U.S economy was in a depression in the beginning of the 1870s, which resulted in job opportunities for our people. So many people hated us because we were taking away numerous jobs from the whites and becoming successful. This hatred is what led to the Chinese Exclusion Act of 1882. Between 1871 and 1880, there were 123,201 of us who migrated to the U.S. As soon as this Act took effect, however, the popularity of Chinese migration dropped drastically. The Act was extended for ten years in 1892 and indefinitely in 1904. In 1943, however, 105 of us were allowed to migrate here because we were a wartime ally of the U.S. when the U.S. declared war on Japan in 1941.

It has been mistaken that all of us Chinese Americans are both physically and culturally the same. We are often mistaken for Vietnamese or Korean Americans, while the Japanese are mistaken for us. We are often thought of as "foreigners" and are seen on television as faceless and not valuing life. Despite the discrimination we face, we strive to work to the best of our ability and, therefore, can be considered quite ambitious. This is how we gained the title of "model minorities."

The first of our people who were workers were referred to as "coolies," "heathen," "mice-eaters," and "Chinks." In the 1860s and 1870s, feelings of hatred toward us were felt in union policies, political platforms, and in the press.

posted by lotusgreen at 8:14 PM 2 comments 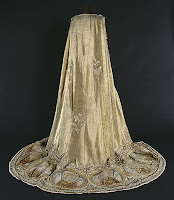 Japonisme might have had a limited effect except that it attracted the serious attention of superior artists and critics, including Théophile and Judith Gautier, Edmonde and Jules de Goncourt, José-Maria de Heredia, and Henri de Regnier. 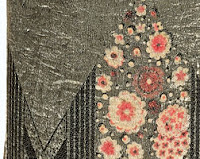 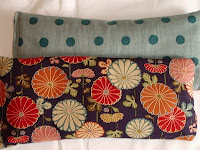 In parti- cular, these artists came to under- stand the appeal of irregularity and to appreciate the Japanese sensibility for the evanescence of nature.

Japanese influence had a major role in inspiring the Impres- sionist movement in France, which caused perhaps the most profound change in the aesthetic of modern Europe.

from
Japan Invents the Future

(top left: jean-philippe worth; hearn title page: emil orlik; third from top left: also worth; bottom left: candace wheeler. the rest are unknown, but i could do some research if anyone wants.)

posted by lotusgreen at 5:55 PM 0 comments 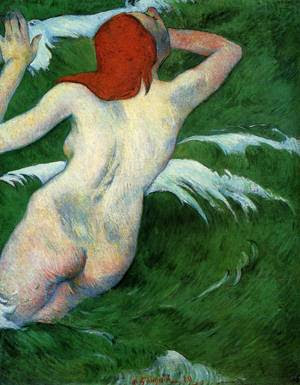 i fell in love with this ondine by gauguin the first time i saw it. it's the color and the move- ment of it, yes, and at one point i realized about its lines, its uses of colors (inclu- ding the outline). but i think mainly it was the sense of surrender, probably the world's poten- tially best and worst thing. 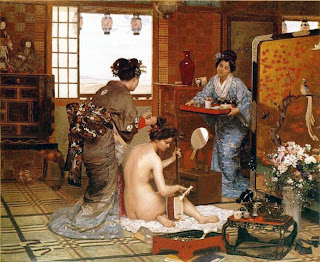 i also now realize that it's the imperfection of it all i love too. the academy in france wanted perfection; that's part of why regular day-to-day humans were rarely portrayed; we saw gods and goddesses, kings and queens. and dogs. in this painting by firmin-girard, while japan's artifacts have been incorporated, he was a straight academician. 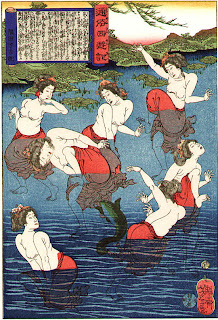 the japanese, along with all their other gifts, gave us real people, real bodies, and that's what i see in the gauguin. these catfish hunters from yoshitoshi taiso are far more related to gauguin's ondine than to girard's pampered sweetheart. 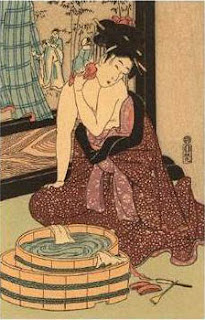 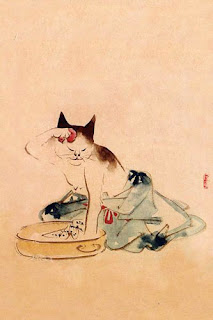