perhaps a little more grounded this evening.... i was confused; somehow i'd thought the aesthetic movement was much earlier than it was, but then it fell into place. i led with some exceptions, and i'll return to them, but for the moment let's look at what i completely forgot to say.

which was to marvel at all the different japonismes and, to some extent, the order in which they took place.
george ward nichols' 1878 book (here) features the shapes, and the contents, that we also see on the japanese print, only on the print the meanings were as either thoughts, titles, sometimes poetry. in the style book they're just shapes and pretty drawings.

yes, the dresser/braquemond/rousseau/etc. pieces we began to look at yesterday preceded them, by 10 - 20 years; many of those, gorgeous though they were, were largely copies of works, often by hokusai or hiroshige, who were nearly contemporaries of the western artisans. 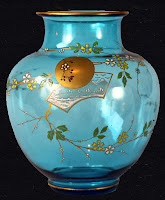 some of these fan-shaped and other patterns did appear on japanese lacquer work, but much of that turns out to appear near to the same dates as did the aesthetic work, leaving us again to blink in wonder at the escher-ish twists of the import and export.

so let us see if we can trace the arrivals of japonisme. at the very beginning, japan's contemporary masters began appearing on the dishware of the french. that, i would say was an honoring, filled with delight. 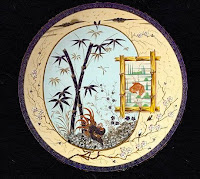 but then as both sides began to realize that, as wilde pointed out, the japan of our current fashions was was one with no reality, and thus both sides were able to take the emblems of the japanese, strip them of meaning, and sell them hand over fist to the west. 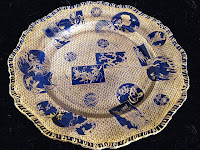 but, interestingly, at the same time, those looking at the incoming woodblock prints with a different eye saw things they translated into their paintings: series of paintings of the same spot in different lights, different perspectives. they saw an unusual balance, and a simplicity of subject choice. these still looked like western paintings (think monet, for example), but they had the changes that the artists had seen. 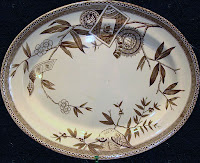 it wasn't until the next generation came along when the influences we talk about here most often began to appear, and would have the most profound and longest lasting effects. say it with me: outlines, asymmetry, large flat blocks of color, areas of pattern, and as, again, wilde said, 'I feel an irresistible desire to wander, and go to Japan, where I will pass my youth, sitting under an almond tree, drinking amber tea out of a blue cup, and looking at a landscape without perspective.' 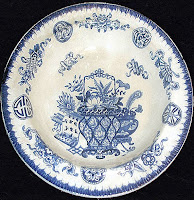 but too, as we have also often seen, and despite the teasing, something profound had happened; people in the west were seeing with new eyes. nature was now something to which we paid our greatest attention, and we saw the shapes there and around us as far more permeable than we had ever let ourselves recognize. despite our best efforts, impermanence was all there really was. 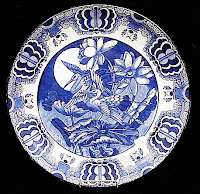 was the aesthetic movement ever more than a style, a fad, an intoxication? if not, then people then were just like people now -- no surprise. and we could guess forever the cultural effects this all had, if any. or we can merely look back and thrill again what treasures the combining of cultures will produce. 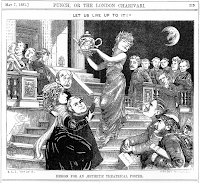 these are only two of many many cartoons, often from punch, that satirize the thrall in which this china held its owners.

check out the victorian web for a wealth of information on the era.

posted by lotusgreen at 9:36 PM 2 comments