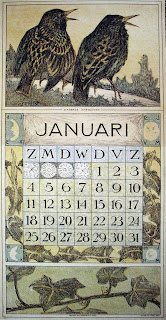 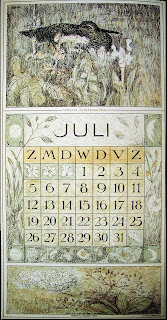 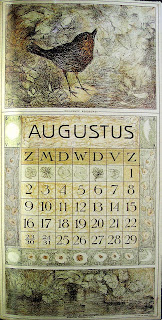 WHITE HERON IN THE STORM 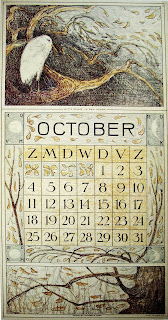 this is all i have for 1914.
it's the only other year with any words added to the images.

posted by lotusgreen at 1:05 PM 0 comments

swimming in the shadows

i have read similar things about the dutch art nouveau porcelain in numerous places:

The Art Nouveau movement developed as a reaction against historicism. The interpre- tation of the wealth of forms to be found in the worlds of plant and animal life, follow- ing the example of Japanese art, was one of the innovative aspects of this movement.

It was also a reaction against the frequently low quality of industrial design. In the Netherlands as elsewhere there was a desire to reinstate honest craftmanship, which led to reforms of technical training and to exhibitions of good examples of design. Art Nouveau in the Netherlands, unlike that of other countries, generally takes the form of symmetrical compositions in which asymmetrical details are incorporated. Decorations are also often confined to the flat surface.

Dutch ceramics of this period are characterized by the large quantities that were produced and by the high degree of mutual influence present. Floral, linear and geometrical designs were adapted. A fairly small group of designers is respon- sible for most of the original models; the others often go back to classical Chinese porcelain and traditional Delft ware.

Inspiration for the decorations was drawn from the pattern- books of, for instance M. Verneuil and E. Grassèt, and the domestic and foreign magazines that circulated. 1

it's that part, as another book puts it, "The artists took as models illustrations from the French book on ornamental plants La Plante et ses Applications ornementales, published in Paris in 1896. This is an instance of how knowledgeable the artists were about the very latest developments in ornamenta- tion... the leading fashions were closely followed by the factories," 2 that confuses me. 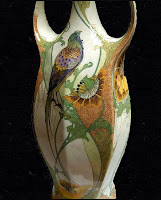 it's clear that the influx of japanese arts and crafts had as much of an impact in the netherlands as they did elsewhere throughout the west. though as in every country the dutch put their own spin on it, the influence is unmistakable. 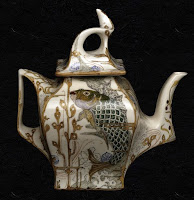 in fact, though japan's influence is mentioned in these books and sites, they seemed to pay more credence to the 'design books' of the times. but i have been through dozens of images of (mostly rozen- burg) porcelain, and the same amount of the many verneuil/ grasset/ mucha style books, and i have actually found very few that have seemed related except for on the most superficial levels. the japanese influence is throughout.

and yet, just as modernisme (art nouveau) in spain is influenced by moorish design and architecture, holland's nieuwe kunst is influenced by both the japanese (which we've discussed to great length), and the indonesian styles, as the dutch east india company set up trade in both places centuries before the rest of the west were allowed to.

note this particular rozenburg vase, one which makes quite obvious the reason their porcelains were called 'eggshell.' both indonesian and japanese influences are readily apparent. flowers with art nouveau grace, stems with the angularity of a shadow puppet.

my continuing ignorance can be immediately revealed when i tell you that it simply had never occurred to me that the afore-mentioned design books were used in such a way! i don't know what i thought they were used for, but never that!

and while i quite knew, as we have discussed before, that japanese design books were made for just exactly that reason, it didn't occur to me that the french ones were too! 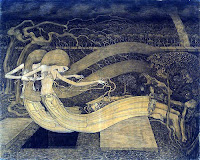 so how did that work? were the designs under some sort of copyright, and a fee had to be paid to the designer (or, more likely, the publisher) to use them? what about the silver studio designs? surely they were not available without some kind of licencing. 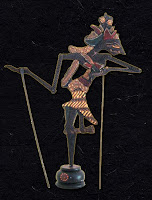 the answers to these intriguing questions will have to wait. maybe someone read- ing this knows! if so, please add your knowledge. see another part of the same loop in the paintings of jan toorop -- clearly the same set of inspirational inputs. look too at all of the dutch calendar makers we've been chronicling: they also designed the pottery, painted the paintings; it was not a large crowd, but it was, as we've seen, a tight one.

posted by lotusgreen at 2:03 PM 2 comments