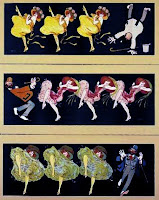 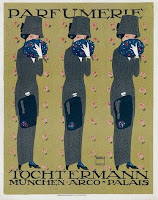 All the kids in the marketplace say
Ay oh whey oh, ay oh whey oh
Walk like an Egyptian 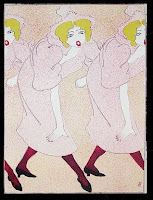 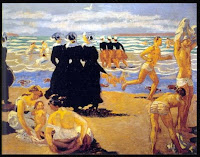 posted by lotusgreen at 5:42 PM 6 comments

(a writer on his 69th birthday,
listens to a tape-recording he had made on his 39th birthday)
-- upper lake, with the punt, bathed off the bank, then pushed out into the stream and drifted. She lay streched out on the floorboards with her hands under her head and her eyes closed. Sun blazing down, bit of a breeze, water nice and lively. I noticed a scratch on her thigh and asked her how she came by it. Picking goose- berries, she said. I said again I thought it was hopeless and no good going on, and she agreed, without opening her eyes.

I asked her to look at me and after a few moments -- (pause) -- after a few moments she did, but the eyes just slits, because of the glare. I bent over her to get them in the shadow and they opened. (Pause. Low.) Let me in. (Pause.) We drifted in among the flags and stuck. The way they went down, sighing, before the stem! (Pause.) I lay down across her with my face in her breasts and my hand on her. We lay there without moving. But under us all moved, and moved us, gently, up and down, and from side to side.

Past midnight. Never knew such silence. The earth.......

Noh is closely connected with the ancient Japanese belief in the unpacified spirit of the dead. The unquenched passion of love, grief, or hatred endows the dead with a sort of immortality, and the ghost is compelled from time to time to emerge out of the Buddhist purgatory in a corporeal form that was his or hers in life and visit the world of the living in order to gain a partial relief from present torments by telling someone the story of his or her agony. 3

clearly, though, this is not singularly japanese. in hamlet too, for example, the living are asked to complete tasks for the dead.

in addition to the pivotal addition of ghosts (the personages of the past), the accoutrements of japanese theater had an influence on beckett as well.

"Beckett keeps approaching with ever increasing seriousness an austere theater, both in its skeletal bareness of structure and in its thematic obsession with past and memory ... It is a triumph of Beckett's art that he has successfully incorporated the very structure of the split soul of the modern man ... And Krapp is of course utterly incapable of exorcising or pacifying his former self. 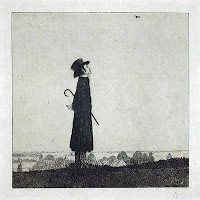 Beckett started writing plays at the point in the history of the Western theater where all the realistic conventions of drama, including the assumption that the theater has nothing to do with the sacred, broke down, and it seems to be that, in his ruthless effort to strip the theater of everything that is not absolutely necessary, he has arrived somewhere close to where [the Japanese] started six hundred years ago.

Yeats had a significant influence on the history of world theatre in the 20th century, principally because he incorporated into his later plays, theatre techniques from the Japanese Noh to create a minimalist "theatre of the mind." Many theatre artists, including Samuel Beckett, are in his debt. 4 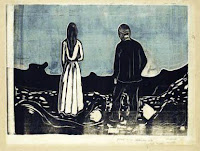 Noh is Japan’s “most classical” form of drama akin to Greek tragedy. Its roots lie in religious ritual, where the miraculous appearance of old gods, releases the players from the rigours of earthly life into the purity and clarity of the spirit world. The purpose of Noh is neither narrative nor moral, but is simply an attempt to express beauty -- the essence of Noh is that true art is felt, not understood.
This may seem a little removed from Beckett’s tramps, dustbins and reel-to-real replays. However the spaces, the purity and clarity are there. In Noh the drama strives to reveal its own essence. In Beckett, all we (we all) face is situation, just situation. The essence never arrives, except that the non-arrival itself, may be the essence. Just as Noh flows between reality and dream, life and afterlife; Beckett challenges dualistic thinking and crosses borders of language, genre, culture, bringing the ultimate questions into the commonplace -- and then asking if the questions matter. 5

posted by lotusgreen at 7:27 PM 6 comments


If I could talk to the animals,
just imagine
Chattin' to a chimp in chimpanzee,
Imagine talking to a tiger,
chatting to a cheetah,
What a neat achievement
that would be! 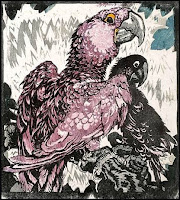 If we could talk to the animals,
learn their languages,
Maybe take an animal degree,
I'd study elephant and eagle,
buffalo and beagle,
Alligator, guinea pig, and flea!

I would converse in polar bear and python,
And I would curse in fluent kangaroo,
If people ask me "can you speak rhinoceros?"
I'd say "of courserous! Can't you?" 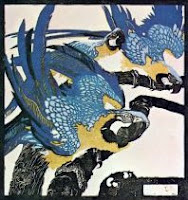 If I conferred with our furry friends,
man to animal,
Think of the amazing repartee
If I could walk with the animals,
talk with the animals,
Grunt and squeak and
squawk with the animals,
And they could talk to me!
If I consulted with quadrupeds
Think what fun we’d have asking over crocodiles for tea!
Or maybe lunch with
two or three lions,
walruses and sea lions
What a lovely place
the world would be! 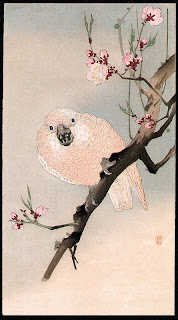 If I spoke slang to orangutans
The advantages why any fool on earth could plainly see!
Discussing Eastern art and dramas
With intellectual llamas
That’s a big step forward
you’ll agree! 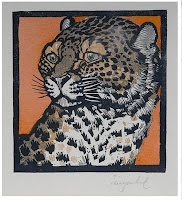 I’d learn to speak in antelope and turtle
And my Pekinese
would be extremely good
If I were asked to sing
in hippopotamus
I’d say “whynotamous?” and would!

If I could parlay with pachyderms
It’s a fairy tale worthy of Hans Anderson and Grimm
A man who walks with the animals
and talks with the animals
Grunts and squeaks and squawks with the animals and they could talk to him!
It's incredible, it's impossible,
but it's true!
A man can talk to the animals
It's a miracle!
In a year from now I guarantee
I'll be the powerful of the mammal
Play chess with camels
No more just a boring old M.D. 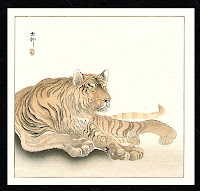 I’ll study every
living creature’s language
So I can speak to all of them
on sight
If friends say
“can he talk in crab or pelican?”
You’d say “like hell he can”
and you’d be right! 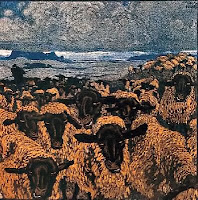 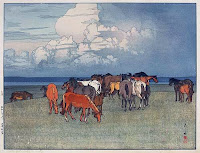 posted by lotusgreen at 9:13 AM 4 comments