O lord, he said, Japanese women,
real women, they have not forgotten,
bowing and smiling
closing the wounds men have made;
but American women will kill you like they
tear a lampshade,
American women care less than a dime,
they’ve gotten derailed,
they’re too nervous to make good:
always scowling, belly-aching,
disillusioned, overwrought;
but oh lord, say, the Japanese women:
there was this one,
I came home and the door was locked
and when I broke in she broke out the bread knife
and chased me under the bed
and her sister came
and they kept me under that bed for two days,
and when I came out, at last,
she didn’t mention attorneys,
just said, you will never wrong me again,
and I didn’t; but she died on me,
and dying, said, you can wrong me now,
and I did,
but you know, I felt worse then
than when she was living;
there was no voice, no knife,
nothing but little Japanese prints on the wall,
all those tiny people sitting by red rivers
with flying green birds,
and I took them down and put them face down
in a drawer with my shirts,
and it was the first time I realized
that she was dead, even though I buried her;
and some day I’ll take them all out again,
all the tan-faced little people
sitting happily by their bridges and huts
and mountains—
but not right now,
not just yet.

posted by lotusgreen at 7:28 PM 6 comments

travelling through music and light

in some cases i've found, dow did take the photo before making the print (or painting) of the same place. but nine years before! did the places stay that identical? did he use the photos as guides. you know what? we will never know (unless i dig up something from his diaries).

thanks to the smithsonian, some dow stuff is making it onto the internet, but there's so much i just can't find. that's part of the reason i feel compelled to put up some of this stuff myself. like a timeline (you know i like those). 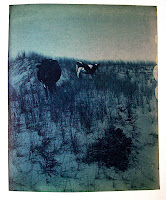 1884 goes to paris to study at the academie julian under boulanger and lefebvre
1885 summers in pont-aven.
1889 returns permanently to ipswich.
1891 meets ernest fenollosa and 'discovers' japanese woodblock prints. teaches art in boston, then opens school in ipswich.

1893 marries minnie pearson; becomes assistant curator of japanese arts at the museum of fine arts in boston.
1895 first exhibition of his own woodblock prints, in the japanese area of the mfa; begins teaching at the new pratt institute in new york city.
1899 publishes composition. 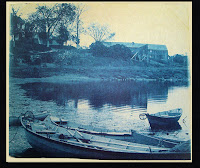 1903 travels around the world. lectures in kyoto.
1904 becomes the director of the art department at the teacher's college of columbia university.

1908 publishes theory and practice of teaching art; publishes by salt marshes in collaboration with his friend everett stanley hubbard, who writes the poetry. 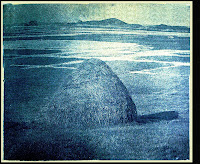 1911 travels to the grand canyon and to california with alvin langdon coburn.

dow's publications are online. (some things aren't. i'm still hunting for the words of a speech or two.) i've had a tough time trying figure out how to present the teachings, but that's what i'd like to try next. 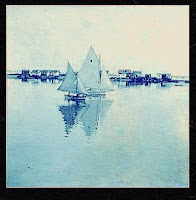 okay, i'll admit it. that last painting is not by dow. it's by robert henri. maybe he was channeling dow. but i love finding these rest, watching the same artist expressing the same things with different 'voices,' a composer listening to his music on all number of different instruments.

we've already looked at dow's moment of epiphany, the realization that what he had been looking for was the book of hokusai prints right there in his hands. let's look a little closer:
dow has now met ernest fenollosa, and is studying with him at any possibility.

"In May, Fenollosa, with a certain flair he had for the dramatic, opened a door and showed Dow two magnificent screens by Okio. Dow looked at them in silence for a space and then exclaimed, 'Why can't I do that?' (The subject was a pine covered with snow.)

To this question Fenollosa replied, 'You can do it if you dare, but you don't dare.'
Dow instantly replied, 'I will dare!'
This pleased the Orientalist and he exclaimed, 'You will, you will, and I dare you to do it.'"
clearly, this was a moment of discovery for dow, of synthesis and excitement. he began seeing in a new way, one that, from his own perspective, returned to the basics in art, what all cultures had at some time done, the essential line, with everything extraneous removed.

the clarity of his vision was such that he went on to formulate, and to develop ways of teaching these insights to others, work that some say became more important than making art itself. he is credited for having changed the way art is regarded and taught in this country radically, and his methods were the staple of american art education for many years.

•
okay -- so we have a moment of person discovery, life-altering, piercing and pervasive. so.... um.... -- what about all these other guys??! was it worldwide epiphany-itis?
i went to the jung pages and apparently the descriptive phrase i wanted to use, 'collective unconscious,' doesn't actually mean what i have always taken it to mean, so that won't work, unless i am allowed to redefine (or expand its definitions) the concept to what i always thought it meant and what fits in rather well here, namely that there is some mysterious (until science figures it out) connection of every human's mind that rises and falls with the tide and explains how one idea can occur in many places at the same time.
spontaneous combustion?
wasn't this the stuff of impressionism, anyway? the release of detail in pursuit of truth?
artists throughout the west were paring down, simplifying, following ideas they had imbibed from the japanese prints; did each and every one of them feel themselves to be a solitary traveler?

it's such an interesting phenomenon-- i wish i knew the name for it.

when things change, we each want to name it, to own it, and to think we know the reason why.

posted by lotusgreen at 7:46 PM 9 comments 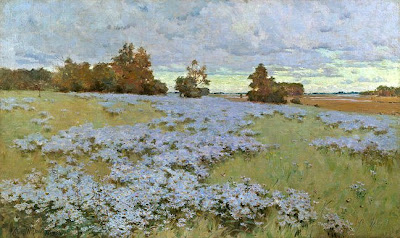