looking at it from the other direction....

how do you see these woodblock prints, particularly when compared with the others i've posted (and i have posted the work of this artist before), or that you've seen elsewhere?

does it make any difference when you read this?: "Mitsukoshi Gonomi; Miyako no Nishiki" (Brocades of the Capital). "The Seasons and Their Fashions,No.8: Autumn. "A Walk to a Country-cottage". This series of 12 designs was commissioned by Mitsui Clothing Store. The Mitsui group (It has two well-known subsidiaries today. Mitsukoshi department store and Mitsui-Sumitomo Bank) was originated from the large dry goods store, Echigoya founded in 1673. It changed its name to "Mitsui Gofuku" in 1893. In order to promote its new image, they commissioned this delightful 12 family portraits to Toshikata. Mitsui Clothing Store changed its name again to "Mitsukoshi" in 1904. They made another edition, this time under the name "Mitsukoshi". The edition by "Mitsukoshi" was featured in the reference book of the Muller Collection.1

it's not an original question, i know, but i'll ask it anyway-- is art made for hire by a department store or bicycle manufacturer, less art than what's made for a samurai or king, or from one's heart?

the whole series is here.

i just realized what the question also is: do the japonese see these woodblock prints differently, knowing they were commissioned for trade?

posted by lotusgreen at 7:42 PM 2 comments 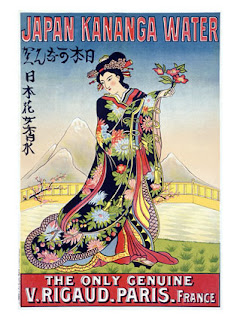 i just came across this quote and i thought it went along with the previous post so well that i thought i'd just put it up now, rather than waiting.

'one of the more recent phenomena typical of the present age, in which art and craft have become reunited after all too long a separation, is the modern bazaar of arts and crafts, an unusual combination resulting in a hybrid establishment, somewhere between an art dealer's and an emporium stocking luxury items as well as consumer goods of a practical nature, owned and run by people who usually represent a peculiar blend of connoisseur, artist, art critic, patron and businessman in the most refined sense of the word.' --max osborn, la maison moderne, 1900

posted by lotusgreen at 2:15 PM 0 comments

the grace of questionable art 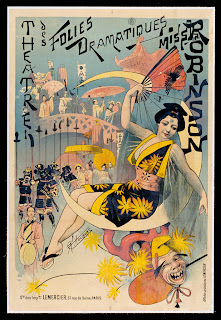 in addition to importing japanese paraphernalia into the newly emerging western art and design, aesthetical ethics were being affected as well. 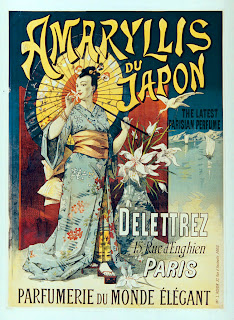 when you think of toulouse lautrec, do you think 'commercial artist' or 'fine artist'? what about mucha? can he be called a 'real artist' if he primarily did 'posters'?


while i'm not really knowledgable about the present-day art scene, it seems to me that the worlds of 'commercial art' and 'fine art' are held at a conscious distance. but what of the past; has it always been true? 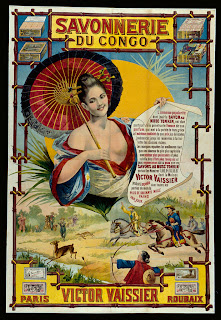 what about western painters who careers depended on patronage from the king? what was never painted, because it might upset the patron? in japan as well, what of these printmakers whose livelihood ended as the shogunate, source of many patrons, was dismantled?

we've discussed, here, earlier, the idea that that japanese infuse all they touch with the consciousness of art, so does this mean they made no such distinctions? and is this something that flowered in this era in the west as well?

(i have no artist names for these posters, but found them all, via bibliodyssey, here. just answer me one question, though: what does the congo have to do with the woman in the japanese costume, or the chinese hunters?) 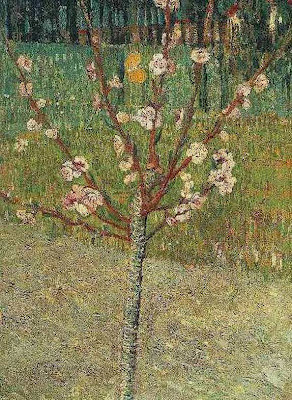 KREMS, AUSTRIA.- As its first major show of 2007, the Kunsthalle Krems presents an outstanding and comprehensive exhibit of Japanese art of the Meiji-era as well as European Japonism which followed in its wake. These two parallel phenomena are in the focus of attention of “Japan”, showcasing the incredible craftsmanship of Japanese Ukyo-e and applied arts while carving out its close ties to the roots of European and particularly, Austrian modernity. (more)

posted by lotusgreen at 7:44 AM 0 comments 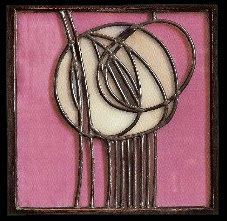 many people have heard of charles rennie mackintosh and why not? with his wondrous designs, from watercolor to architecture, we still thrill and delight to his work. 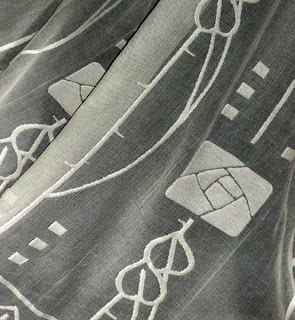 but fewer have heard of dard hunter, whose sweep was more narrow, perhaps, but no less profound. 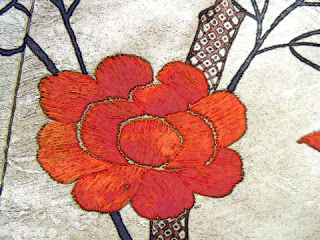 i can find no record of the two ever having met, but we still see from both what is often called 'the scottish rose.' mackintosh was indeed scottish, but hunter was from ohio, and though he did study in europe, i also find no men- tion of him visiting scotland. 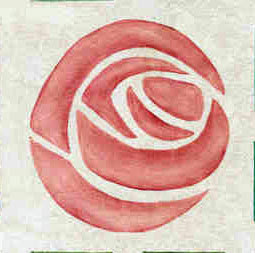 they both, however, worked in a time when artists the world over were learning to see in new, simplified ways from seeing the work of the japanese for the first time. 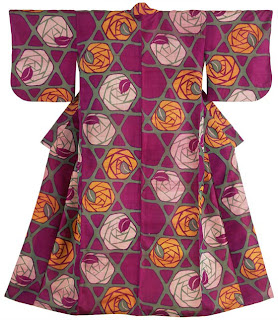 and, as you can see from this 1920s kimono, the japanese were learning back.

posted by lotusgreen at 1:40 PM 2 comments 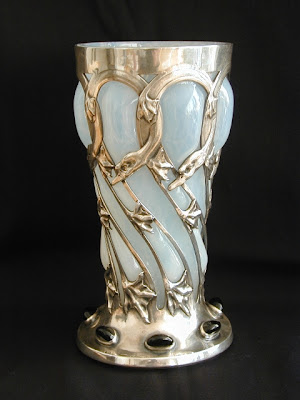 the best images i found for it are here.

posted by lotusgreen at 1:46 PM 2 comments

the cleveland museum of art has put together a lesson plan about fans in japan:

• Fan-- a visual symbol of a person’s profession or rank in society
• Folding fans—thought to have been invented in Japan for imperial ceremonial use
• Hiogi—a wedge-shaped or crescent folding fan with wooden blades
• Komori ogi—literally “bat fan,” a folding fan made of paper
• Ogi-e—fan painting 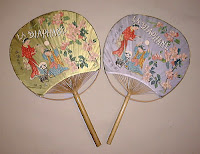 • Fans have long played an important role in Japan where they were carried by both men and women. In addition to performing the practical function of cooling the air and shooing away insects, they were an indication of rank and status; the fan carried by a courtier would be different from that of a samurai warrior or a Zen tea master.

• The uchiwa, or round flat fan, is believed to be the earliest form and to have been imported originally from China.

• The folding fan, hiogi, is thought to have been invented in Japan in the 7th century and was initially reserved for the sole use of the emperor in performing court ceremonies. It was made from slender wooden blades fastened securely at one end with threads running through holes in the other end so that it could be spread open in a radiating arch. 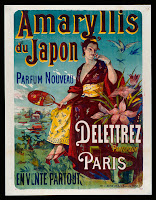 • The earliest wood fans were undecorated. Later fans were made of paper and silk enhanced with calligraphy or painting.

• The use of fans became gradually more widespread and spread through all levels of society.

• The union of function with beauty, which is one of the benchmarks of Japanese
aesthetics, is particularly apparent in the creation of fans. Painters used their
distinctive shapes to create individual artistic expressions in ink or color. 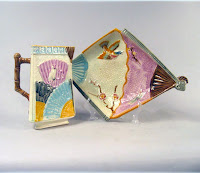 • The oldest folding fans in existence date from the end of the 12th century. Since most fans were essentially items of everyday use, they were discarded when worn out, broken, or replaced. Later on, however, many famous artists began to paint
fans, which have been prized and preserved by collectors.

• The use of fans has long been represented in Japanese art and literature; the first literary mention of the folding fan appears in an 8th-century poem and the epic tales of the Heian period, The Tale of Genji and the Tales of Ise, make frequent references to them. The use of fans is frequently depicted on both hanging scrolls and folding screens.

• Although fans are generally associated with Asia, they inspired many 19th-century Western artists to create their versions.

• Fans are often given as gifts or as tokens of esteem.

(you know that second-to-last one really wants a decent explanation!)

posted by lotusgreen at 7:49 PM 0 comments 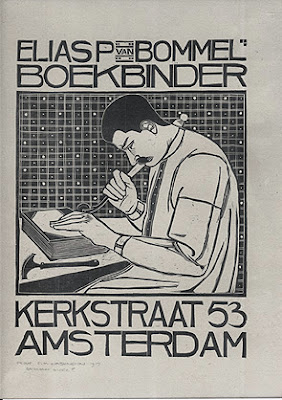 for theorist, bibliophile, and bookarts, the jugendstil stylings of theo molkenboer. (click 'vaste tentoonstelling,' then 'overzicht.') and for everyone else for whom books will always "still exist."

posted by lotusgreen at 5:40 AM 4 comments 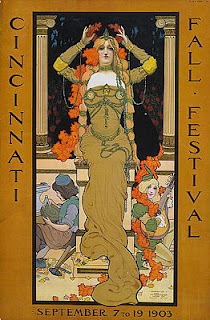 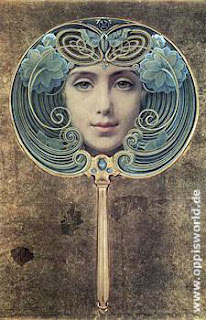 posted by lotusgreen at 4:44 PM 0 comments

the smaller arts I

i discovered a blog today that was new to me,
and filled with wonders. 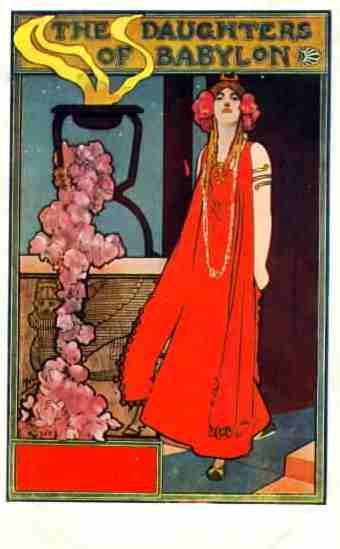 how could i have forgotten?

posted by lotusgreen at 2:26 PM 0 comments