no beauty's ever free I

maybe some people get it at a younger age, but i'm turning sixty-five next month, and this somehow seems the appropriate age to realize some things. i suppose one might call it 'the duality of things,' or not. but the realization, of course, brings delight and melancholy in equal parts.

we have looked at the development of plakatstil, with its german outgrowth of hand-written posters, and that style as an outgrowth of both japanese calligraphy, and a long tradition of hand-lettering in german posters. here we begin to see how that style jumped the ocean and was perfectly suited for the new industry of railway posters. (and we've also looked at the changing needs of travel.)

some wonderful artists emerged at this moment in time. see extensive, full-color coverage in zega & gruber's "travel by train." sam hyde harris's posters are so amazing (see next post as well) that i have a very difficult time keeping it in my head that they were created over 80 years ago! they are so fresh, and beautiful to me; harris just jumped into the middle of my favorites list right next to maurice logan.

numerous other emerging artists included are maynard dixon, winold reiss, and w h bull, whom we have looked at before, and louis treviso, for example, whom we have not, and numerous others are featured in luxurious color; wish i could find online images on all of them. but in studying their work it becomes obvious from whence come their roots. 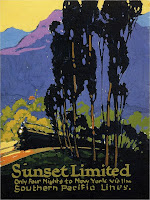 the romance of the railroads is born in these posters, created to ensure wanderlust, a greener grass on the other side of the railroad tracks. for unparalleled beautiful vistas, for the opportunities of self-reinvention, try a train. 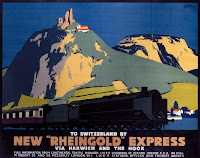 so where's the dark side?, you are wondering. you mentioned melancholy? indeed i did. i've mentioned it before. the baton of art and design is handed on, the baton raised comes down again, always, generation after generation. martin lermann-steglitz, like so many of his contemporaries, was lost to the camps, lost permanently, finally declared dead in 1962.

there's nothing one can learn that finds one only delighted, there is no inside without an outside, no yin sans yang. i felt for many years that happiness required the vanquishing of the dark side and now i know that place has never existed. krishna, vishnu and shiva braided inevitably together, inseparable. there's no way to love the world fully without an open heart, which bars nothing.

in the next post, we'll hold these wonderful rail posters up to the light. what do you think we will see?

posted by lotusgreen at 8:03 PM 5 comments

no beauty's ever free II

INDIANS! (as they were obviously ubiquitously known then). indians were such a draw to these new american tourists that not only were they featured in so many of the railway posters, but locomotives, no, whole trains were named 'chief,' and destinations such as 'indian days,' and 'indian-detour tours,' were created by santa fe, canadian pacific, southern pacific, great northern, and other railroads to draw the sight-see-ers on.

the artwork, you may agree, is often stunning; railway posters seem to have the ability to maintain mystery and romance wherever they occur. indians were what? an unknown culture? or the tokens of one? 'wild' animals in zoo-parks? simple-minded crafters of pots and baskets? it's hard to know.

at the same time as they were being used as lures to well-to-do gentlemen and their wives and children, they focused another attention on their very existence: 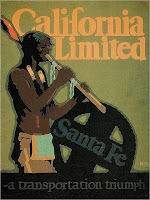 The first European Americans to encounter the western interior tribes were generally fur traders and trappers. There were also Jesuit missionaries active in the Northern Tier. As United States expansion reached into the American West, settler and miner migrants came into increasing conflict with the Great Basin, Great Plains, and other Western tribes. These were complex nomadic cultures based on horse culture and seasonal bison hunting. They carried out strong resistance to United States incursions in the decades after the American Civil War, in a series of Indian Wars, which were frequent up until the 1890s, but continued into the 20th century.

The transcontinental railroad brought more non-Natives into tribal land in the west. Over time, the U.S. forced a series of treaties and land cessions by the tribes, and established reservations for them in many western states. U.S. agents encouraged Native Americans to adopt European-style farming and similar pursuits, but European-American agricultural technology of the time was inadequate for often dry reservation lands. In 1924, Native Americans who were not already U.S. citizens were granted citizenship by Congress. 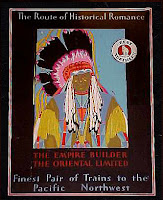 In 1906, 300 Ute under the leadership of Red Cap left the White River Reservation in Colorado headed for South Dakota. The Ute were upset about the allotment of their reservation and increase of non-Indian settlers. In South Dakota, they hoped to form an alliance with the Lakota and with the Crow to stop the allotment program. The army stopped the group and detained them as prisoners of war at Fort Meade, South Dakota. The army was unconcerned that courts had ruled that Indians could not be detained or imprisoned without a trial. Nor was the army concerned that no actual state of war existed at the time. The army viewed the Ute as potential enemy combatants and felt that it had the right to hold them in prison indefinitely.

While the army often ignored due process of law when dealing with Indians, there are cases in which the army did attempt to see due process carried out. In 1915, a Mexican sheepherder was murdered in Colorado and popular opinion assumed that he had been killed by an Indian. The court of public opinion blamed Tsenegar, a Ute Indian, for the death. Subsequently a posse of 26 cowboys crossed into Utah and surrounded the Ute camp of Old Polk. Their supposed goal was to capture Tsenegar who was rumored to be in Old Polk's group. The cowboys, who were drunk at the time, began firing into the camp with no warning. The Indians had no idea who these men were nor why they were shooting at them. The Indian response was to fire back to distract the cowboys and then to slip away. When the smoked cleared, there were dead on both sides and the Ute had vanished.

In 1913 there was a rebellion among the Navajo which came to be known as the Beautiful Mountain Uprising. The uprising started when the Indian agent learned that Hatot'cli-yazzie, the son of Ba-Joshii, had three wives in spite of the agent's edict against plural marriages. Fed by information from the Indian agent, local newspapers painted a picture of the entire Navajo nation in revolt with a horrible massacre impending. To avert this massacre and save the non-Indians, according to the newspaper accounts, military action was needed. In response, the army sent in the cavalry with 261 men and officers to put down the Navajo "hostiles" who were under the leadership of Ba-Joshii. The Navajo force numbered only twelve men.

posted by lotusgreen at 8:02 PM 3 comments