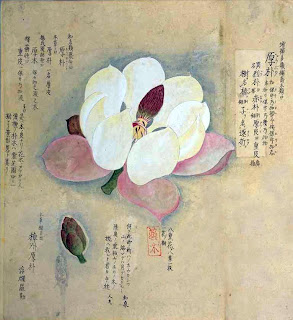 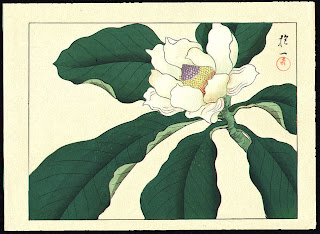 but i could sit

here for a year,

thinking of my child, 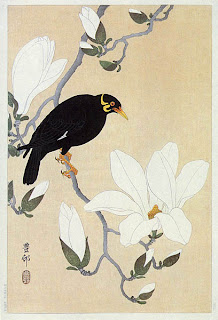 oak nor reed
resists the 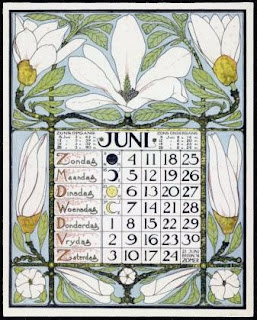 but each lets go

is at first wet, 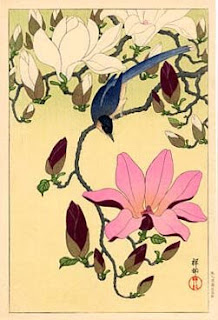 to the darkgreen darkness
where magnolia leaves

inches off the receding earth. 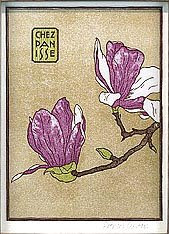 then the blooms on the tree will open.
they are so clearly flesh of
our flesh.

without the prolonging bone, 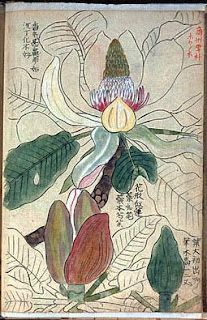 when touched --
and i touch them --
the blossoms smudge,
the flesh dying beneath my acid hands,
turning brown in the shape of fingertips. 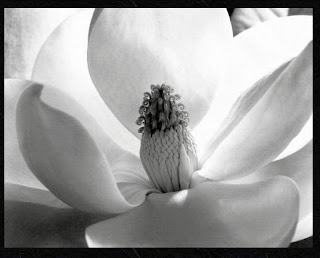 from saints and strangers
c copyright 1985

posted by lotusgreen at 1:13 PM 4 comments

The first warm days of spring, give them to me,
a tepid rain, crocus poking through last year's leaves. 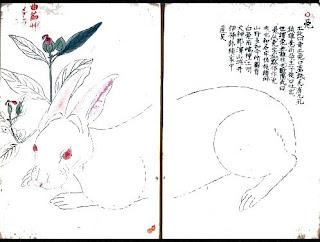 Give me the heart of it, pale yellow, sky blue,
trees bare but for the hard buds, the few birds. 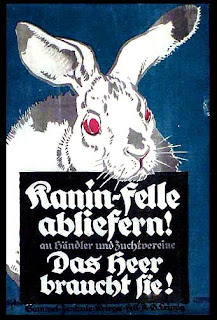 To hear the screen door
slam again.
To shoo the flies
from the house,
the spoiled fruit.

I'll take all of it,
Mother of Summer,
the smell
of manure shoveled
over the potatoes,
diesel fumes 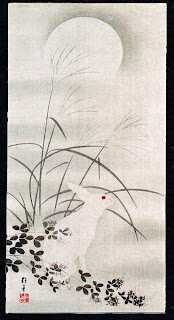 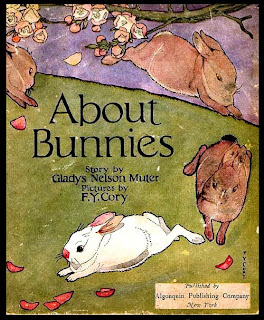 Even sinus infections
and rusty rake tines
sunk in rank earth
near the shed,
mushroom spores, 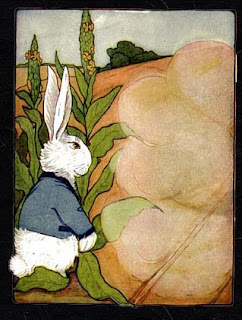 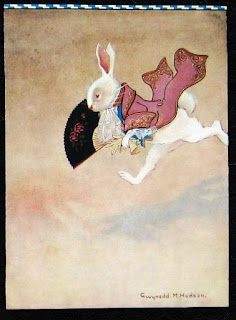 their dull black cloaks
for the shiny wings
of iridescent spring.
Let them ride
the rippled air 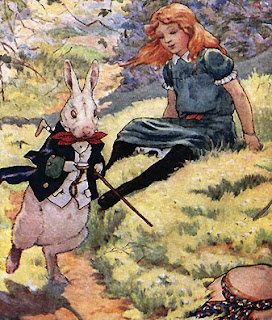 over the barren Sunday parking lots,
the farther fields,
where the weeds will grow thorny,
wild and tall.
Dorianne Laux
copyright 2008


(today is exactly forty years to the day since i moved to california. it's my anniversary. and because she has put a spell on me so that i cannot see a rabbit without thinking of her, this is for karla.)
Happiest Vernal Equinox to Each of You.

Thank you for visiting this blog.

posted by lotusgreen at 4:06 PM 6 comments

japonisme in the land of the pueblo (etc.), fin

so much has been left out of this series. there's been no mention of genocide or theft, though those are surely in the background when we mention national parks, for example.

we haven't talked about the marginalization of nations who were relegated to the position of being 'bad guys' in the 'westerns' which had started filming in 1903. 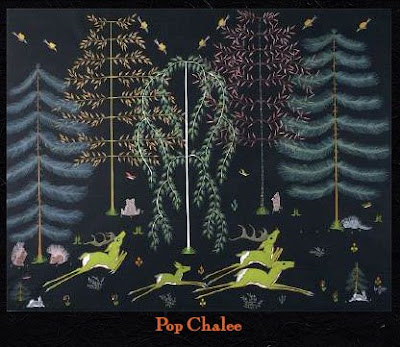 what we have talked about was beauty, and cultural transference, and best intentions, and, sometimes, best results.

we have talked about many of the similarities between the paintings from the first half of the 20th century done by american indians to those edo era prints from japan: outlines, areas of flat color, image simplification.

we haven't mentioned the effects on their art of giving new art materials to the native tribe members; i missed commenting on the fact that in none of the traditional indian paintings do we see 'close-ups'; like fred astaire the indians would only dance when their whole body showed. 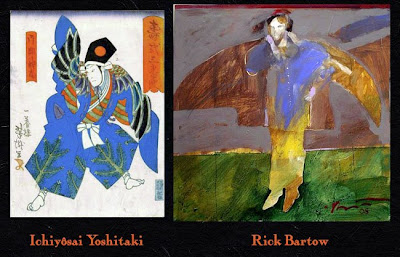 that somehow the grimaces, the revealed faces, that we see in the kabuki actor portraits are there in the work of the indians painting today. that many of them retain some of these elements we've discussed, that they are, in my opinion, some of the most extraordinarily gifted artists working today. that, by and large, the work from the native artists is seen as genre painting, and is ignored in the major international art universe. 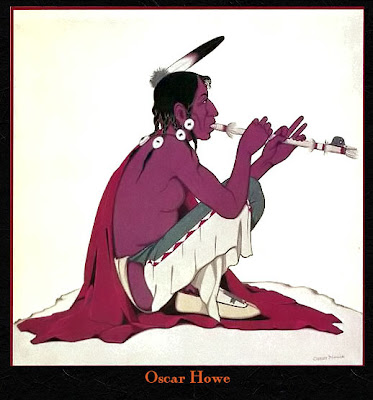 oscar howe was a yanktonai indian and student at the santa fe studio school. a letter he wrote in 1958 illustrated, all too clearly, one of the effects this marginalization:

"Are we to be held back forever with one phase of Indian painting that is the most common way? Are we to be herded like a bunch of sheep, with no right for individualism, dictated to as the Indian has always been, put on reservations and treated like a child and only the White Man know what is best for him... but one could easily turn to become a social protest painter. I only hope the Art World will not be one more contributor to holding us in chains."

see some of rick bartow's gorgeous work here and here. see fritz scholder here or here. there's so much online, in museums around the country, and here.....

i've surely left out much, but i've learned a lot doing this. i hope it's been interesting for you. i guess it's like this whenever you undertake to learn something new: what you end up with are tears of sadness and a heart filled with wonder.

posted by lotusgreen at 3:23 PM 9 comments

japonisme in the land of the pueblo (etc.) VII

as we've seen over the last two weeks, native americans and native american lands grew in fascination after the completion of the railroad which made them accessible. The artists went first, some with exploitation in mind, and many with inspiration in their hearts; the beauty, the people, the weather: it was as though a new nation have been born in the middle of this one. in fact, it was many nations, and they had been there all along.

with the artistic communities growing, an interchange between painters and indians who wanted to 'learn to paint,' began. classes became frequent, and from them came work which began to be shown around the country. before long the bureau of indian affairs set up indian schools around the country with a strong emphasis on teaching the arts. 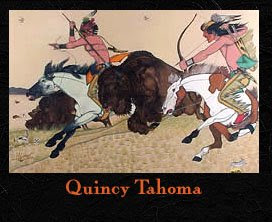 quincy tahoma (1921-1956) was a navajo painter. he was a shepherd for many years, but then in 1932 decided to go to the santa fe indian school where he learned to paint in dorothy dunn's 'studio' class. he went on to become one of the most prominent pupils. 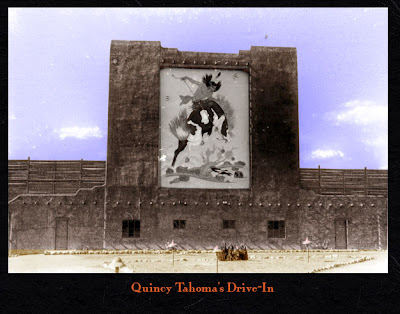 the Studio of the Santa Fe Indian School became the centerpiece of the Collier administration's commitment to Indian arts and a model for other Indian schools across the country. 3

The studio attracted student artists from tribes all over the United States and was so influential that it is possible to speak of the "Studio style" that dominated American Indian painting through the 1950s and reverberates among the work of many artists today. 4

japonisme in the land of the pueblo (etc.) VI

For a decade or more Winold Reiss dedicated his talents to creating a pictorial epic of the North American Indian which shall preserve the distinctive characteristics of these fast vanishing tribes. The Indians of the Northwest were his favorite subject for research and the large number of portraits and figure compositions in color and in line which he made of the Blackfeet Indians constitutes a veritable saga of the tribe.

Mr. Reiss brought to his task an unusual and paradoxical combination of talents...his interest in racial type and character and his unfailing eye for the decorative aspects of his subjects. Indianologists commended Mr. Reiss's studies of the aborigines for their ethnological accuracy and the knowledge of custom and folklore which they display; and those in search of decorative art which shall also have an authentic American note were very apt to commission Mr. Reiss for the carrying out of their ideas. 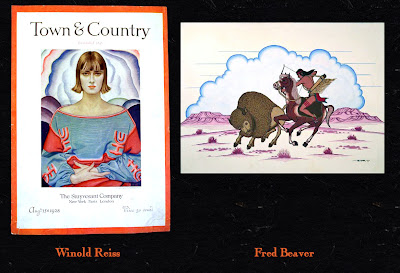 It is perhaps another paradox that a painter of German birth should have been a pathfinder in discovering the decorative possibilities of the North American Indian. Mr. Reiss was born in the Black Forest and received his training as an artist with his father, Fritz Reiss, well known genre painter specializing in the peasant types of the Black Forest, and with Franz von Stuck at the Royal Academy in Munich. 1

this story is not without debate nor without sadness, but there's another chapter or two to go through before we get to that. 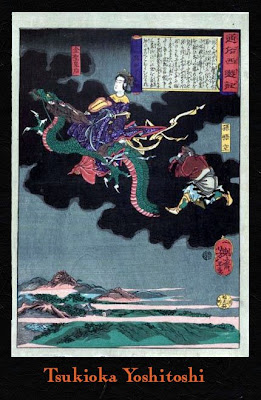 for now let us just point out clouds and how they had become seen. winold reiss opened an art school in glacier natonal park where he taught tourists and some of the blackfoot indians who were most often their subjects. blue eagle studied with him privately. what the world had begun to incorporate into their design awareness was 'art deco,' and current awareness is the only thing that one can teach.

we can see it above in winold's magazine cover and fred's buffalo hunt, in nc's book cover and in my photo. clouds have always had linings upon occasion, but they were never painted quite like that until they saw the styles of the japanese.

(for some fascinating background, and perspective, check this out.)

posted by lotusgreen at 8:25 PM 0 comments