painting in a minor key 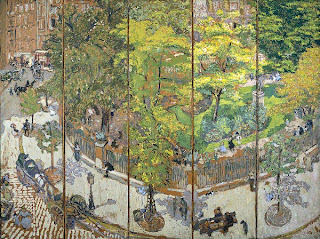 this whole rather stream-of-con- sciousness meandered from one inspiration to another (i'll get to that), and since much of this travel was through the nabis' neighborhood, i tried to find that tune in my head. forgive my synaesthesia, but i realised that the only way i could describe it was through sound. 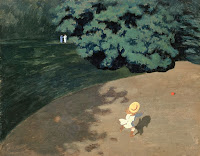 this adventure began when i when i saw the elmes poster at the (below right). i knew it reminded me of something,
and it was clearly indebted to nabi music.
(see more at this amazing blog!)

i looked through my nabi books, and i think that this vallotton (above left) comes the closest, and that perhaps the ones i was seeing in my mind's eye were conflations of a few of the other ones. 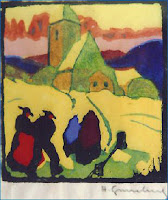 he next two are just echos, the synapses skipping. 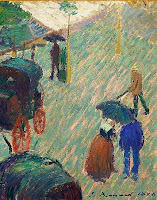 while bernard was the only one of these two who were part of the pont-aven crowd, you can surely see the route. but all this made me want to grasp what message i was getting from their work. 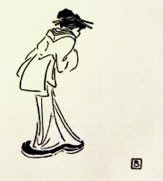 and i found that for me, it is non-verbal. it like the minor- key in the key- strokes of symphony, like a rotation that leaves every- thing rotated, not quite in
free-fall...........

three of these bottom images are from another won- derful site, i added the fourth, from ernest batch- elder, but its original artist is not attributed. personally, i think the bonnard more matches the batchelder.

there is something terribly attractive about that skewing, that minor key; it can be almost unbearable to come right-side up again. yes, the artists were heavily influenced by japanese prints, their flatness, their blocks of color, and their their knowledge of the importance of the non-linear line, and symbolism, and a response to the impressionists. but i believe that the goal, probably unconscious, was to play by the music that they heard, not anyone elses.

posted by lotusgreen at 3:58 PM 0 comments