inevitable. looking back across the 20th century, it seems that every movement in art history peels smoothly off the one before, uncurling itself as though new. but it's not; it's an inevitable step on the road, given that, expect this.

modern abstract art is inevitable, given the stripped-down shape-for-shape-sake of the bauhaus years. art had been making the dive into abstraction for decades, to the point where meaning and reference become moot: sheer existence. ("just dance! don't think!"1) 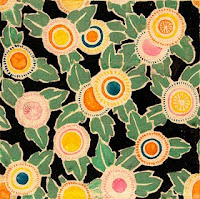 art deco into bauhaus is obviously inevitable: abstraction of shape into outline lent itself to form over fantasy. clearing out, clearing away to make way for the modern age in which everyone was too busy to think a wasted thought, or waste a single movement. the line was important then, which was inevitable.

and yes, i am simplifying, but i wouldn't want to fall behind the times! also bold were the times leading into the art deco moment. art nouveau was about that line, that curve, that color, that biological reference...

to my eyes nothing whatsoever in anything that preceded the arrival of the east predicted what was to follow. the beginning of the line which was not to end. nothing in the tiny and drab patterns of western textiles hinted of the explosion that was to come. (nor predicted was the inspiration by a zionist art nouveau designer from galicia of a british-turned-american designer named louis rhead!)

it wasn't always a linear progression; some of the textiles of the deco stylists more resembled the japanese textiles than did their earlier counterparts. but was this exuberant jump to boldness predictable? i think not!

was the festoonization of clothing with flora and fauna an expected result of incoming culture? why should it be? not a chance! or was it to be expected that practically overnight color broke the color barrier? i pale just thinking of it.

that upper-crust drawing rooms might be thrilled to adorn their walls with spiders might have raised some eyebrows, but other than little miss muffet, everyone would have it no other way. for it was nature and color bursting from their wraps in the holds of the black ships arriving from japan.

and while japan likely viewed their latest fashions as being inevitable, given the season before, not a soul, i would bet, would have ever guessed that in the west they would inspire a series of inevitable progressions for decades and decades to come.

posted by lotusgreen at 3:51 PM 0 comments