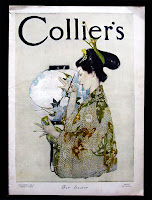 we've looked at magazines here several times, but rarely looked into. often the people we've seen on the covers wear japanese clothes, or carry parasols, or lean against a painted screen. these all feature all japanese people. why are they on these particular covers? and what being talked about inside. i can answer a bit of that, here and there....

truth is, there's more i don't know, or even understand, than i do. i'll just set out some stuff i found. the magazine success (below) is summed up by the magazine reviewer in the craftsman. "Success contains many good things, chief of which is Hosmer Whitfield's 'Why Japan Must Win.' There is a graphic picture of the Mikado and his influence, showing him to be an enlightened and progressive monarch, in the very front rank of the world's rulers. 2

also in that issue one would find this quote from, in a piece about child labor. "Juliet Wilbor Tomkins writes, 'A great deal has been said about the immorality resulting from factory life. Perhaps there has been more or less exaggeration on this point, or, rather, a failure to make honest comparison with the morality of these same people when not employed in factories. Yet there is no denying that the indiscriminate herding of men and girls does not prompt modesty and virtue. I know a ramshackle old building in New York in which the top floor is used by a manufacturer of electrical shoes. On the floor beneath is a laundry, separated from the street by three long flights of stairs, which are utterly dark except for the gas jets insisted on by the authorities.

At half-past five, every afternoon, the shoe men come trooping down just as the laundry girls are let out. tired with the hardest kind of work, and flushed and warm with the long day in a steaming, enervating atmosphere. And night after night the gas jets are mysteriously put out, so that all flock down together in pitch blackness. When you are tempted to believe that the evils of child labor are exaggerated, think what they are to a girl when she is too young to protect or even to understand herself. Terrible things have been begun on those stairs, yes, and happened there: and they are not the only dark flights of stairs in the New York factories. No one knows who turns the lights out: it may be, — heaven help them! — the girls themselves. 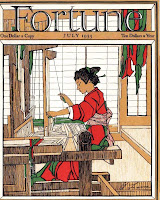 The managers could easily find a way to prevent it, and they give glib promises; but they do not really care. It is the public at large that has to care, to demand better protection for its children. I have seen other conditions so wrong and so openly offensive to decency that they could scarcely be believed; and they persisted until an inspector, in righteous rage, stood on the spot while reform was inaugurated. Filth, with not even a pretense of privacy.— how long can immature modesty stand that unharmed?'" 3

wondering about the illustration on the cover: does that cover both subjects, or just the one on japan? is this a father teaching a child -- to work? to know? or is child labor slightly different when you're talking about asians? what about these other covers? why was an asian woman chosen for an easter issue? (eastern issue?) we see two covers with japanese women with children on their backs, at a time when i'm sure that was never even imagined here. we then have women working, and playing; at least readers were given images that passed docility.

a description of the issue of fortune reads: "July 1933 complete issue of Fortune magazine, profusely illustrated in color and black and white, 124 pages, 14 x 11 1/2 inches, color pictorial paper wrappers as issued. Light soiling to cover (including spot at lower left) otherwise very good condition. Interesting articles include: "The Reign of Meiji ...forty-five amazing years during which Japan jumped out of the feudal age into the industrial present"; article on silver with double page decorative color map by C. H. Appleton "Silver World Production and Consumption." The article on the Owens-Illinois company includes a black and white diagram by Richard Edes Harrison showing the bottle making process. The color cover illustration of a Japanese weaver is by Bertha Lum, whose Japanese woodblock prints are most sought after." 4

1 in his book on the actress margaret anglin, john levay writes (click to read):

i'm left with the predictable it was the best of times, it was the worst of times. like all times. seeing those things that haven't changed is balanced by learning of some things that have. and i'll repeat: i can understand the contents, meanings, contexts, and nuances, to the same degree as understanding literature in translation. not that that stops me from reading them.

many of these great scans can be found on a very cool new(ish) site: Galactic Central!

posted by lotusgreen at 7:24 PM 2 comments