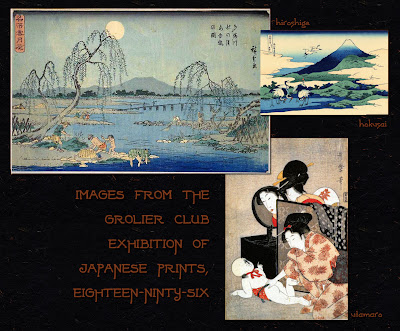 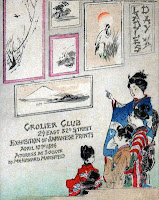 A largely unknown side of Frank Lloyd Wright emerged when he visited Japan: He developed into one of America's foremost ukiyo-e woodblock print collectors and dealers.

"When I first saw a fine print it was an intox- icating thing. At that time Ernest Fenollosa was doing his best to persuade the Japanese people not to wantonly destroy their works of art," Wright said. 1

japanese prints were to become a lifelong passion, inspiration, and source of income for him, but how did he learn so much about the prints in such a short time? the answer is shugio hiromichi. "Shugio Hiromichi (b. c. 1853) arrived in New York City in 1880. The Oxford-educated aristocrat moved easily in the city's artistic circles." 2 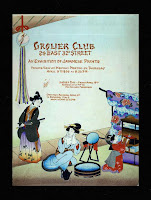 suggestions as to how the two men met vary from in japan, while wright worked on the im- perial hotel, chicago when shugio deli- vered a speech, at the cos cob colony where many japanists often gathered, or the tile club, or in boston, or, possibly, at the grolier club in new york. with both the advice and the connections of shugio, wright became one of the major purchas- ers of the woodblock prints in america.

New Yorkers were introduced to Japanese wood-block prints by Shugio Hiromichi, the director of the First Japan Manufacturing and Trading Company, a Japanese importer of porcelain and parasols. In 1889, Shugio curated the first significant show of ukiyo-e (“pictures of the floating world"), colorful wood-block prints and posters representing urban and natural pleasures, such as geisha in outdoor revelry or theater actors in costume.

These lyrical, contemplative prints inspired a host of turn-of-the-century painters. James Whistler, in particular, borrowed from the ukiyo-e abstract sensibility in his work, saying, “If the man who paints only the tree, or flower, or other surface he sees before him were an artist, the king of artists would be the photographer. It is for the artist to do something beyond this.” 3

the exhibitions at the grolier club, in 1889 and in 1896 (for which shugio wrote the catalogue and its introduction) were major influences on art in the u.s. "American impressionists derived their understanding of Japan not only from books and prints but also from Japanese friends." american impressionists met shugio at the cos cob colony, and at the aesthetic movement's tile club.

"The Tile Club was created as an informal fraternal order that met regularly to paint ceramic tiles and enjoy social camaraderie and the stimulation of their fellow artists. Over the years, The Tile Club expanded to include painters, sculptors, illustrators, architects, and even a few authors and journalists. Artists include Winslow Homer, J. Alden Weir, William Merritt Chase, Arthur Quartley, Twachtman, Weir, Robinson, and Augustus Saint-Gaudens. The art colonists patronized Shugio's emporium as well as those of his rivals (like Vantine's)." 4 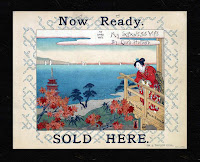 no discussion of shugio hiromichi would be complete without mentioning the catalogue he prepared of the collection of convicted criminal t. e. waggaman. in his position of treasurer of washington d.c.'s catholic college, waggaman embezzled a million dollars -- 1905 dollars, then indulged his absolute obsession for asian arts. fortunately shugio was able to value and describe his collection, once waggaman was in jail, and therefor sell enough of his bounty to pay back much of what he owed.

posted by lotusgreen at 7:10 PM 4 comments