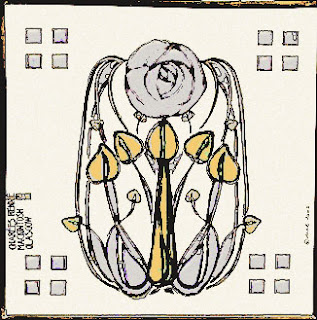 i began to notice the similarities between the scottish designs, metalwork, glass, and of course embroidery, and that of the wiener werkstatte. this is not coincidental, as it turns out. 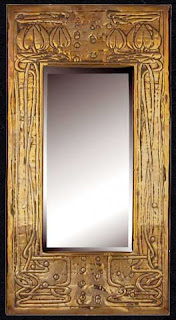 mackintosh's design, with its nature-based simplicity and breakdown of the separation between art and craft (both things clearly influenced by the influx of japanese arts and crafts), was more appealing to the viennese than was the art nouveau they saw in france and belgium, which they saw as excessive. they, unlike mackintosh's fellow glaswegians, saw him as a genius. 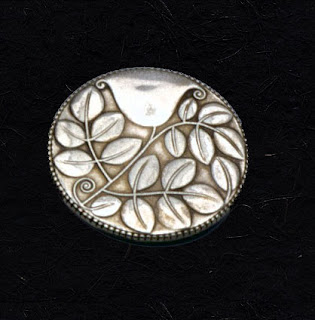 Influenced and encouraged by ... Mackintosh, Hoffmann and Moser realized their dream of founding a workshop for the applied arts to promote the best in design matched by the finest in craftsmanship. In June 1903 the Wiener Werkstätte was established; it "represented a not-previously achieved international high point in the applied arts, and, with its unmatched fine workmanship and exquisite taste, became the educator of the whole civilized world." 2 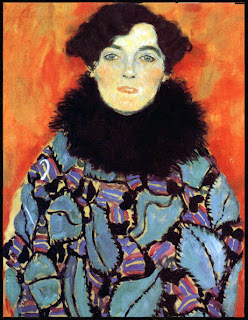 The Wiener Werkstätte believed that artistic endeavour should permeate all aspects of everyday life; no object was so menial that it could not be enhanced by beauty of form and execution ... [When] Mackintosh and [his wife] Margaret Macdonald had exhibited their work to the Viennese public, Hoffmann and Moser were intrigued with the elegance and sensibility of their creations, which is evident in the puristic simplicity and geometric austerity of their early objects. The Japanese-inspired components of the workshops’ products were also important. The Secession had dedicated their sixth exhibition (1900) to Japanese art, and in Vienna in 1901 the Österreichisches Museum für Kunst und Industrie (now Österreichisches Museum für Angewandte Kunst) exhibited the woodcuts of Katsushika Hokusai. The textile patterns and inlay designs of Hoffmann and Moser share strong similarities with Japanese stencils and prints. 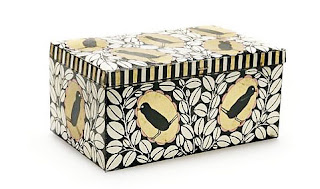 The distinctive trademark of the Wiener Werkstätte included the initials of both the designer and the executing craftsworker. The fine arts and the applied arts were awarded the same level of importance. The primary concern of the group was to respect the inherent decorative and functional qualities of the material used and to work within its natural properties. © Oxford University Press 2007 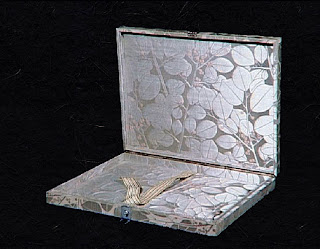 The story began with a competition launched in December 1900 by Zeitschrift FürInnen- dekoration, an innovative design magazine published in the German city of Darmstadt. European architects were invited to design an Art Lover's House. Mackintosh sent in his entry in March 1901, his one chance to design a house unfettered by financial constraints or a conservative client. But he was disqualified for failing to include the required number of drawings of the interior. He hastily completed the portfolio, which he then resubmitted. Delighted with the designs, the judges awarded Mackintosh a special prize (there was no outright winner). 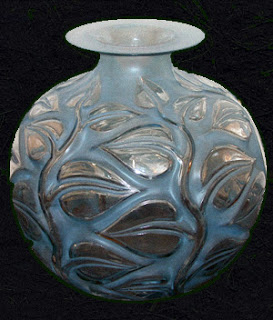 Publication of these drawings did much to establish Mackintosh's reputation abroad as an original and distinctive architect, particularly in Austria and Germany. The Art Lover's House is an important twentieth-century building because it anticipates the abstract forms of Modernism. At first glance it could be an illustration from the thirties. Artists of the avant-garde Vienna Secession described Mackintosh as “our leader who showed us the way” – an acclaim that he was never able to gain at home. Rich Glasgow businessmen never quite took him seriously. 3

in france, poiret (dufy) and lalique were later to feel the influence of this style, but were, of course, french.

posted by lotusgreen at 5:59 PM 1 comments

where are the dresses? 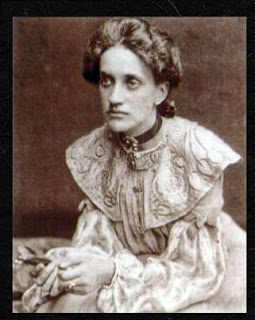 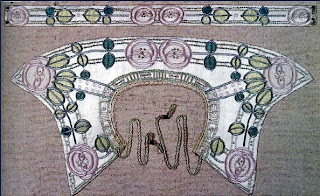 (i find it consistently frustrating trying to find images of gowns from a certain era. more and more are available from the twenties and the thirties, and i do love them, but there is something about this earlier era, call it aesthetic, call it glasgow-style, call it 'arts and crafts'.... whatever one calls it, i am awed by them.


yes, i've found a few to bring to this blog, but there are but a tiny few to find. where are the dresses? i've seen them in museums, occasionally, but in general they're not part of what gets put online. nor are they often illustrated in the really fairly large reference library i have here. metal, glass, ceramic, wood. but little if any textile -- mostly women's -- arts. 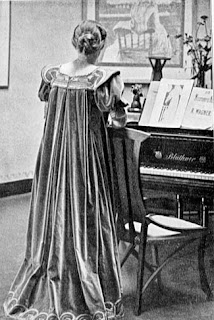 there are more illustrations of dresses than there are dresses.


could the difference in age alone be the reason for their invisibility? what is it about this one particular kind of embroidery that drives me wild? is it celtic in its roots? chinese/ japanese? guimard and macdonald look like they work from the same muse. some stories about glasgow here, and what a wealth was born there.)

...[A]ll costumes are caricatures. The basis of Art is not the Fancy Ball. Where there is loveliness of dress, there is no dressing up. And so, were our national attire delightful in colour, and in construction simple and sincere; were dress the expression of the loveliness that it shields and of the swiftness and motion that it does not impede; did its lines break from the shoulder instead of bulging from the waist; did the inverted wineglass cease to be the ideal of form; were these things brought about, as brought about they will be, then would painting be no longer an artificial reaction against the ugliness of life, but become, as it should be, the natural expression of life's beauty. 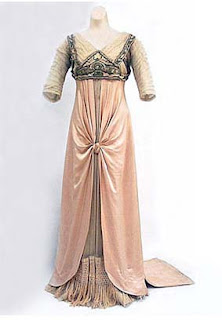 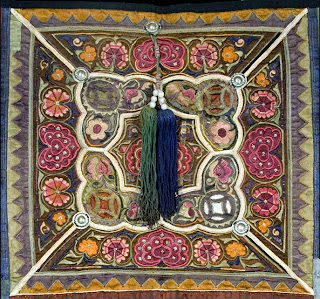 Nor would painting merely, but all the other arts also, be the gainers by a change such as that which I propose; the gainers, I mean, through the increased atmosphere of Beauty by which the artists would be surrounded and in which they would grow up. For Art is not to be taught in Academies. It is what one looks at, not what one listens to, that makes the artist. The real schools should be the streets.


There is not, for instance, a single delicate line, or delightful proportion, in the dress of the Greeks, which is not echoed exquisitely in their archi- tecture. A nation arrayed in stove-pipe hats and dress- improvers might have built the Pantechnichon possibly, but the Parthenon never.

And finally, there is this to be said: Art, it is true, can never have any other claim but her own perfection, and it may be that the artist, desiring merely to contemplate and to create, is wise in not busying himself about change in others: yet wisdom is not always the best; there are times when she sinks to the level of common-sense; and from the passionate folly of those -- and there are many -- who desire that Beauty shall be confined no longer to the bric-a-brac of the collector and the dust of the museum, but shall be, as it should be, the natural and national inheritance of all,-- from this noble unwisdom, I say, who knows what new loveliness shall be given to life, and, under these more exquisite conditions, what perfect artist born? Le milieu se renouvelant, l'art se renouvelle.

posted by lotusgreen at 8:08 PM 0 comments