it is your final quarter, and you begin to realize that you will never in this lifetime learn the answers to every burning question you carry and net even counting The Big Ones, i mean the daily important (to you) ones, like Who is the Artist(s) for the Issues of St. Nicholas and Munsey Magazines Below?

a season begins and there are too many changes to process. two doctors disappear and another moves 20 miles further away. one replacement doctor is nice, but the other is six feet tall (i'm 4'11". having shrunk) then sits me in a normal chair while she settles astride the largest balance ball i have ever seen. she's peers down at me from an ungodly height, then emails, accusing me of "trying to get away with something" with regards to my meds which i don't understand at all.

i need to crawl under the covers. i need to pray for rain. i need the saturation of primary colors. i need a new crossword puzzle. i need a bath.

i know it's easy to say 'i'm having a senior moment,' when in fact you've always been this forgetful, this addled, this easily roused.

Two other things happen in this moment, increasing its feel of import. have i ever told you about mary ellen robertson? yes, i see that i have. best friend from high school, though i haven't exactly been able to explain why, and why, after hearing of her death, the only thing i could do to find relief was to shave my head, and it is shaven still. 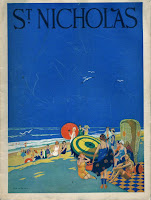 last month on pbs, there was a full show from broadway of Memphis. see it. in it a character sings of a moment that changed his life in The Music of My Soul. he was a white southern christian boy, but that was the moment that black music started being heard by white ears.

the character, Huey, sings: When I was a young boy/ My daddy sat me down/ He said “son, don’t you never go / To the dark side of town/ I’m talking downtown Memphis/ See, that’s where the black folk play”/ And I said “Yes sir daddy”/ And then I snuck down anyway/ See never was taught to read none/ Oh no never taught to write/ The only thing my daddy taught/ Was white should stay with white/ But I heard it through the alleys/ It floated on the breeze/ It burst out through the doorways/ And it knocked me to my knees/ It broke down all of my senses/ And make me feel so good/ See I was lost but now I found/ The music of my soul /The music of my soul. 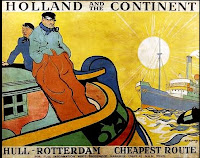 this was me and mary, see. she knew the music. i taught her how to dance. this song, this musical, at last allowed me to specifically name mary's and my bond by its true name: mary & me found soul. this touched me more deeply than anything other than hearing of her death has touched me in a long while. there is something so integral about this moment it is like watching my birth through a window. the moment of recognition.

TRYING TO NAME WHAT DOESN'T CHANGE

Roselva says the only thing
that doesn’t change
is train tracks. She’s sure of it.
The train changes,
or the weeds that grow up spidery
by the side, but not the tracks.
I’ve watched one for three years, she says,
and it doesn’t curve, doesn’t break,
doesn’t grow.

Peter isn’t sure. He saw an abandoned track
near Sabinas, Mexico, and says a track without a train
is a changed track. The metal wasn’t shiny anymore.
The wood was split and some of the ties were gone.

Every Tuesday on Morales Street
butchers crack the necks of a hundred hens.
The widow in the tilted house
spices her soup with cinnamon.
Ask her what doesn’t change.
Stars explode.
The rose curls up as if there is fire
in the petals.
The cat who knew me is buried
under the bush. 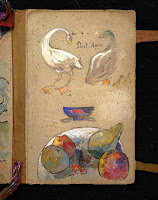 The train whistle still wails its
ancient sound
but when it goes away, shrinking back
from the walls of the brain,
it takes something different with it
every time.

as my mind kept cataloguing the changes i couldn't keep up with, the flock of Cedar Waxwings came to the cotoneaster, covered in red berries. it felt like it had been forever since i had seen them. wasn't this the wrong time of year?

when i moved into this house -- it'll be 20 years in august -- i began a bird record-book. that way i could learn who was who, and when they came. this has led to some amazing 'coincidences' -- ie. things that often occur simultaneously, year after year, without announcing themselves. simple to not note. yet because of the book i noticed that a baby hawk sat at the top of the tallest tree being dive-bombed by all sorts of other birds on july 25 and 26 in 1995 and 1996, and that the hooded oriole showed up in the same week in '94, '96, and '98.

posted by lotusgreen at 9:14 AM 0 comments