Above autumn's burgundy
and rust,
beyond the orange groves
chafing and ruddy in the frost,
a cloud lifts into blue . . .

the west goes up all haydust, flame,
and the flat land glimmers
out to it on the day-stream--
it is Millet's sky of "The Angelus," 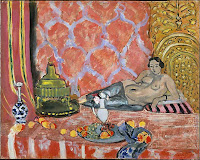 that nine- teenth century sky
we have only in paintings
and in these few still moments
in their rose and amber rags.

As a child, I remember this . . .
standing on the creek stones,
dusk moving over the fields
like a ship's hull pulling away

with that first sense of loss
and release; I saw it was
all about the beginning of dust
rising into the long sky's seam.
into my own two eyes and hands. 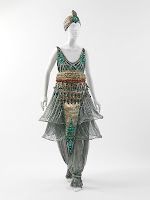 A chalk-white moon overhead
and to the right, umber waves
of sparrows back and through
the empty trees . . . 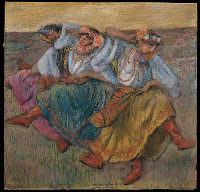 Soon, stars will draw analogies
in the dark, but now the world
is simple as the dead leaves
glowing in this late hour, 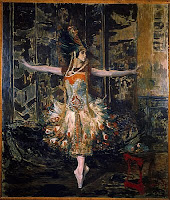 simple as our desire
to rise lucent as clouds
in their camisoles of dust,
the cool air burning though us

over leaves drifting on a pond,
over the last memory
of ourselves looking up,
stunned as a carp blinking at the light.

(this whole exploration in hue began when i noticed, in the metropolitan museum's collection, the oddly matching color schemes of the (at top) dagobert peche textile and the callot soeurs gown. i am not sophisticated in color theory, but i poked around until sense seemed to begun being made. the ballet russe had a tremendous influence on design in the first quarter of the twentieth century. how those became the colors of the ballet russe, and how these same colors came to become circulated around the western world, i do not know. but know that matisse as well as bakst designed their costumes, then carried the language of their colors into the world.)

posted by lotusgreen at 4:01 PM 0 comments 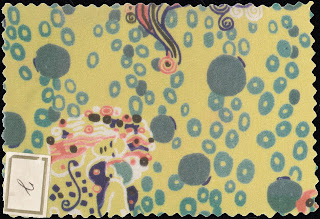 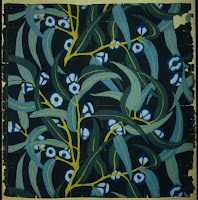 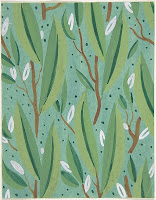 you cannot imagine how much this thrills me. for example, one of the first things i did in paris was to go to the museum of decorative arts (i'm not sure if that's what it was called then, then being 1989), go into the back rooms where the glassware wasn't so much displayed as stored in cabinets with labels on them. and i was so enthralled that i took notes so i would never forget: 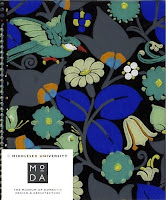 "daum-- pink fleurs, silver a nuit; albert louis dammouse-- les colours l'art nouveau et iris verre; alphonse georges rayen-- red wheat a blend & lotus; galle-- very pale blue & green; pannier freres-- red carp & lotus; george despret-- les colours...." of course i remember none of these and am not even sure that i am reading my own writing correctly. what you are reading is ecstasy by glass. 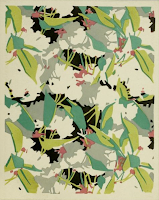 having the newly increased access to the met's collections feels like that too. one (me) can spend all day viewing french clothing from the 20th century, taking sidetrips at coco chanel, callot soeurs, madeline vionnet, and the house of worth. while i wish the timeline searches were more, the whole set of fine-tuning possibilities can make finding your particular interests easy. 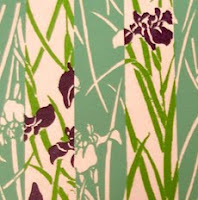 and look at these colors; it might as well be spring. after the first world war, design was bursting out all over, nature, color, and the drift towards abstraction had become normalized to the western eye, and there was reason to celebrate. 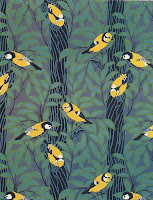 "after the austerity of the war years there was a move towards strong colors and a touch of the exotic." 1

these styles, these artists, are not new to this blog; chinoiserie is more mentioned in that book than japonisme, but it's traces are evident.

designers from the silver studio "show their interest in the formal clarity of japanese designs. particularly influential were the beautifully rhythmic, conventionalized patterns of woodblocks and stencils. arthur silver himself was deeply interested in japanese art, subscribing to bing's artistic japan, and collecting japanese prints and stencil sheets." 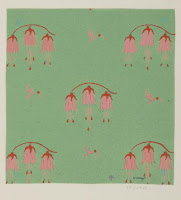 the book is quite clear in reminding us that these scrumptious designs were available only to the rich. the rich had more a taste for them; the rich could afford them. i had a similar realization in perusing the 1920s fashions on the met's site. had i been there, i might have worked where i helped design them, but i would never ever wear one. i would never hang these papers on my walls. 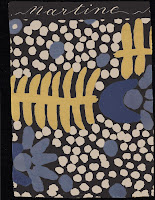 fortunately that ache can be assuaged with glory: that one may now devour the riches of the past, almost up close and personal, is incredibly satisfying, and takes up much less room in the closets.