not all japanese patterns were as bold as we've seen. many were smaller, repeated, pastels.... but still they had symbolic meanings--not only the patterns themselves, but also everything from sleeve lengths to amount and colors of layers, etc. once again the west was delighted to adopt colors that were new to the victorians, and once again they adopted them sans symbology, but that didn't diminish the love for them a bit.

Once upon a time, an old man was walking around the temple courtyard. He was stopped by something in the air; he looked up and realized a large cherry blossom tree. He looked closer, and discovered several areas on the leaves were eaten by insects. He was impressed by the random patterns nature made... The name of the temple was Shiroko Kannon-ji, located in Ise region (current Suzuka City area in Mie prefecture), and this small incident in the courtyard took place more than 1300 years ago. There are various theories to the origin of Japanese stenciling, and the exact details are unknown, yet I tend to like this story. Great discovery can occur from something as simple as taking a walk in the garden! Incidentally, about four stencil shops already existed in the Enreki time (782-806) according to the documents kept in the same temple. 1 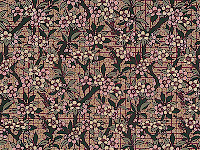 Japa- nese Kimo- no pat- terns can sig- nify the kimono’s rank in formality by how wide spread or pervasive the pattern is as well as the kimono color. Three distinct categories of Japanese kimono which define degrees of formality are, Komon, Tsukesage, and Homongi. The Komon by virtue of the wide spread stenciled or painted repeat patterns which cover the entire kimono is at the lowest most informal level of formality. Komon dyeing, which has the meaning of "small-figured designs," has a tradition of about 400 years. It started as a method of transferring the family crest to the "Kamishimo," the ceremonial attire of the warrior class. During the Edo Period, Komon dyeing gradually spread among the people in general. This Komon dyeing is a traditional technique of high quality that makes use of stencils cut in intricate patterns. 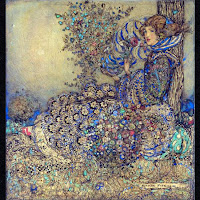 The Tsu- kes- age is next in rank to the Hom- ongi kimo- no. The tsukesage kimono can be worn by both married and single women to both formal and informal gatherings. For formal occasions, a crest should be applied to the back seam at the top. Tsukesage kimono have designs dyed from the hemline in the front and back which travel to the top of the shoulders. Designs on the sleeves also travel upward. The Homongi pattern because of its asymmetrical patterning which continues without a break across the side seams to the back hem is the highest level of formality Homongi kimono are made from bolts of silk, which are sewn up into the finished length, then hand painted, taken apart, dyed, and then resewed. 2 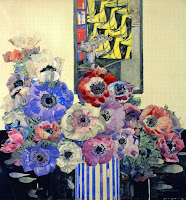 just as shadows and reflec- tions hadn't occurred to japanese artists, colorful prints hadn't, apparently, occurred to western designers. each had a long history in their own cultures; even perspective went back to the renaissance. japanese prints were collected in books and offered for use as kimono fabric, and also colored paper (sometimes for origami), screens, and more. in each culture, what they hadn't done before was so embraced as to be ubiquitous, emphatic, and each gained meaning by what they came to signify in their new societies. 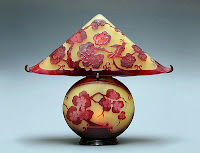 posted by lotusgreen at 3:18 PM 4 comments 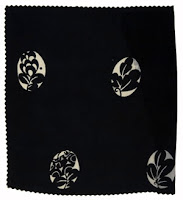 i assume people have always communicated through their clothing. today, whether it's ex- plicit (a slogan t-shirt), a 'uni- form' (waitress, gang member, frat boy, dyke), or only just subtle enough for the elite to understand (signs of status). 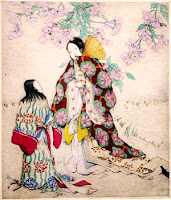 but i haven't been able to come up with another example of a culture who did so as widely and specifically as have the japanese. (can you?) 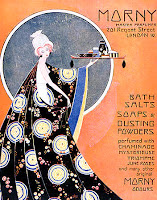 The use of family crests for identifica- tion and decoration became popular during the Kamakura period (1185–1333). Many of these miniature masterpieces were based on plants and animals and are still in use and understood today. Originally their apparent simplicity was a ‘visual’ shorthand for a complex sequence of ideas known to a select few. This shared secrecy and playfulness (often based on puns) greatly enhanced their appeal. Depiction by suggestion is a recurring theme in Japanese art. 1 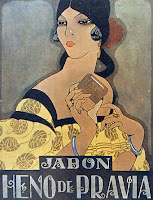 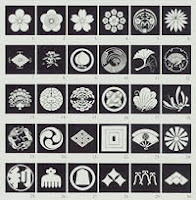 i can see that hav- ing a pict- orial lang- uage as well as a tradition, for example, of having crests for families as well as flora, fauna, and more, may have predicated japan's highly symbolic textiles, but i can't see why the west had so little. at least, once we saw these patterns, we embraced them--though devoid, of course, of 'secrecy,' 'playfulness,' and meaning. but not without delight.

posted by lotusgreen at 2:27 PM 0 comments

let there be song 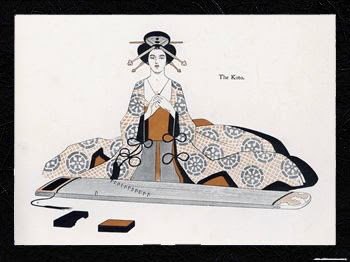 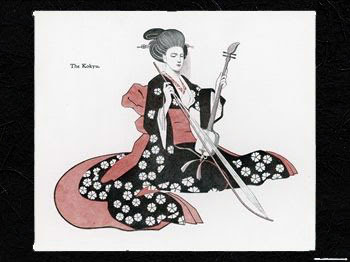 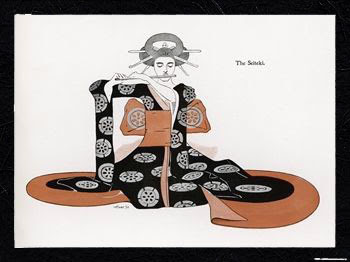 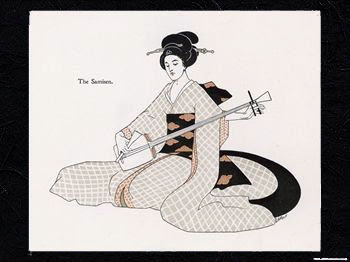 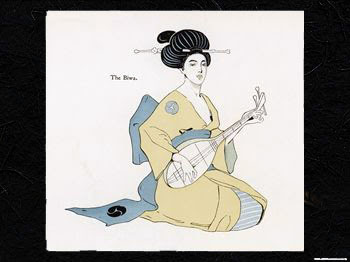 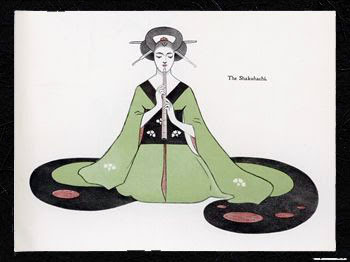 this entire series, which i like better and better the longer i look at it, is by r. (rich- ard) halls, as is the 'salut au monde' poster in the next post. it was origin- ally pub- lished in the 'west end revue.'

posted by lotusgreen at 4:44 PM 4 comments

what do you hear? 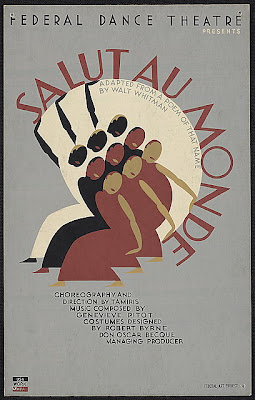 What do you hear,
Walt Whitman?

I hear the workman singing, and the farmer’s wife singing;
I hear in the distance the sounds of children, and of animals
early in the day;
I hear quick rifle-cracks from the riflemen of East Tennessee and Kentucky,
hunting on hills; 25
I hear emulous shouts of Australians, pursuing
the wild horse;
I hear the Spanish dance, with castanets,
in the chestnut shade, to the rebeck and guitar;
I hear continual echoes from the Thames;
I hear fierce French liberty songs;
I hear of the Italian boat-sculler the musical recitative of old poems; 30
I hear the Virginia plantation-chorus of negroes,
of a harvest night, in the glare of pine-knots;
I hear the strong baritone of the ’long-shore-men of Mannahatta;
I hear the stevedores unlading the cargoes, and singing;
I hear the screams of the water-fowl of solitary north-west lakes;
I hear the rustling pattering of locusts, as they strike the grain and grass with the showers of their terrible clouds; 35
I hear the Coptic refrain, toward sundown, pensively falling on the breast of the black venerable vast mother, the Nile;
I hear the bugles of raft-tenders on the streams of Kanada;
I hear the chirp of the Mexican muleteer, and the bells of the mule;
I hear the Arab muezzin, calling from the top of the mosque;
I hear the Christian priests at the altars of their churches—
I hear the responsive bass and soprano; 40
I hear the wail of utter despair of the white-hair’d Irish grandparents, when they learn the death of their grandson;
I hear the cry of the Cossack, and the sailor’s voice,
putting to sea at Okotsk;
I hear the wheeze of the slave-coffle, as the slaves march on—
as the husky gangs pass on by twos and threes,
fasten’d together with wrist-chains and ankle-chains;
I hear the entreaties of women tied up for punishment—
I hear the sibilant whisk of thongs through the air;
I hear the Hebrew reading his records and psalms; 45
I hear the rhythmic myths of the Greeks,
and the strong legends of the Romans;
I hear the tale of the divine life and bloody death
of the beautiful God—the Christ;
I hear the Hindoo teaching his favorite pupil the loves, wars,
adages, transmitted safely to this day,
from poets who wrote three thousand years ago.

a little late for your august calendar. i would apologise but the dates aren't the same anyway, and besides, if you are reading this, you are probably using calendars such as this as decoration rather than information. which is fine by me. 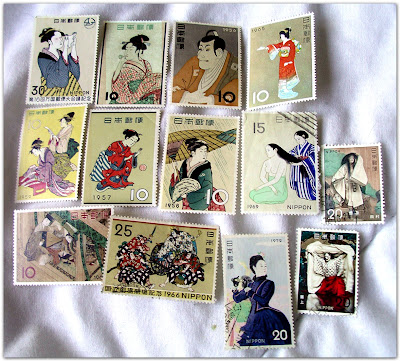 and a hearty thank you! to jgodsey for a gift of stamps. i will think of a way to display them; they're too lovely to keep in an envelope.

i wonder if the one on the right is sada yakko. i love the one with the yellow background and the combing hair one... and all the rest.

posted by lotusgreen at 6:08 PM 0 comments

tadamasa hayashi came to paris to assist and translate in the setting up of the paris universal exhibition of 1878.

at the time that he came, wood- block prints were quite devalued in japan, so he quickly realized that he could fill his cases with them, and sell them as art,
at art prices, in france.

thus were many people in paris introduced to japanese prints, and began collecting them.


one of these was henri riviere.

he not only bought from hayashi, but they became close friends, and hayashi became a patron for riviere. 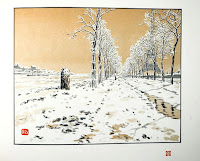 the friendship included instruction of a sort as to printmaking methods, but it also included the recognition that riviere had,

without knowing it, revived ancient japanese printmaking methods for his own work.

when, after a close friendship of fifteen years, hayashi returned to japan, and died soon thereafter, riviere gave up printmaking.

yes, many others, as we've discussed, embraced what japan had to teach.

but to my eyes, henri riviere was japonisme's mikado.

(don't miss the wonderful photogravure site; the hiroshige site that has a permanant place in the sidebar; and the comprehensive henri riviere site.)

BIRDS APPEARING IN A DREAM

another a tail of color-coded wires.

One was a blackbird stretching orchid wings,

another a flicker with a wounded head.

and all returned when the air cleared.

One was a kingfisher trapped in its bower,


deep in the ground, miles from water.

Some had names and some didn’t.

Named and nameless shapes of birds,


at night my hand can touch your feathers

and then I wipe the vernix from your wings,

you who have made bright things from shadows,

you who have crossed the distances to roost in me. 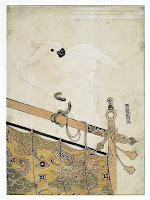 (this image on the right is from this blog, which frequently displays wonderful portuguese and/or spanish japonisme images from magazines and books. additionally, he has documented with word and image the "portuguese lafcadio hearn.")

posted by lotusgreen at 1:14 PM 0 comments