Of Woodblocks and Puppets 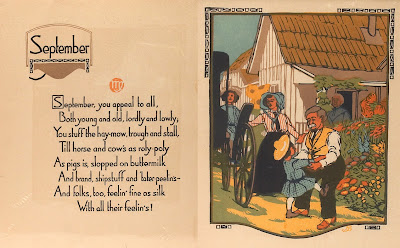 German-born Gustave Baumann found his way to Brown County [Indiana] in the early part of the 20th century via the Art Institute
of Chicago and a return to Germany. After studying printmaking in both locales, Baumann set up a press in a vacant store in Nashville and
there perfected his skills.

A trip into Brown County to investigate art possibilities led the artist to tell a biographer that "Brown County was easy to commute to, and I found that restful something we all yearn for. Life was simple. I could stay two months for $100."Baumann leased or rented the rooms over Genolin's drug store—four rooms for $4 a month. 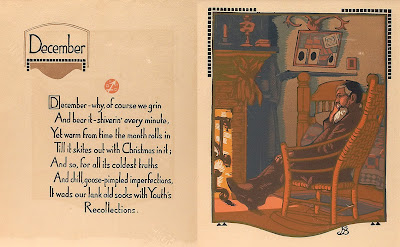 During his time in Brown County, Baumann was commissioned by Indianapolis based children's poet James Whitcomb Riley to create
12 illustrations for his book, "All the Year Round." "I did the book,
but not knowing the rules of the game, it turned out to be a Baumann book with Riley text. It consequently was a dismal flop," Baumann
told a biographer.

"I liked the place," Baumann said. "Someone has said that literature and art flourish wherever people give themselves time to think. Indiana was one of those places. The artist was accepted with amused tolerance. As such, he could move around freely without being exploited as a strange creature who radiated publicity value. But art is a kind of tyrant. It pushes you around. It came to me dressed up in wanderlust." 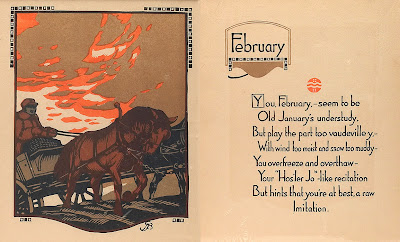 The same wanderlust that brought the printmaker to Brown County
is the same wanderlust that took him away. He once wrote, "Instead
of being tied to a musty museum, the artist likes to herd in colonies where life and landscape are a source of inspiration. There are
many of these all over the United States. Some of them have worn themselves out. Of those that persist, Provincetown, Brown County, Indiana, Taos, New Mexico, and Laguna Beach, California, are perhaps the best known."

It was New Mexico that lured him from Brown County. The Baumann's home in Santa Fe became a meeting place for all kinds of poets and writers. "In fact, the whole artistic community met there," said one
of their friends. "Jane had a sort of open house tea every single day,
and anyone who wanted to could come and join. She was a wonderful cook and baker." 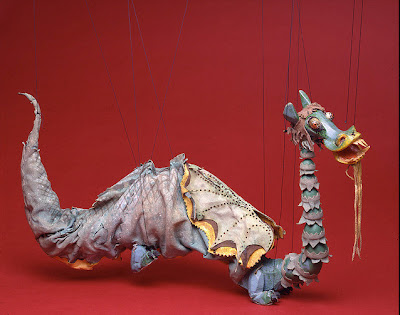 Baumann had started making marionettes around 1930 for a change from prints and oil painting. "He never worked them, though," said his daughter Ann. "He couldn't coordinate speaking and manipulating them. Mother could and he advised." Over time the collection of carved wooden marionettes grew to about 60, with three modeled after Ann, Jane and Gustave himself. And the family and their friends began putting on puppet shows in the Baumanns' living room. They also took the show to various schools, to Colorado, and to Albuquerque.

The artist's talented work in the wood for blocks for his prints carried over into his marionettes, leading one of his New Mexico friends to say, "They're remarkable things, just as artistic as his wood blocks. He loved working in wood, was a master carver, and this is where he put his creativity. They [the marionettes] brought an awful lot of enjoyment
to a lot of people."

see more of these wonderful marionettes 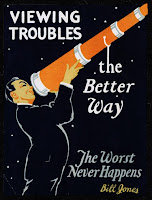 conditions in the US during the twenties, the period during which all four of these poster series were published. also, it was the period which resembled conditions here today in many ways.

these four series, two of which are new to me, all 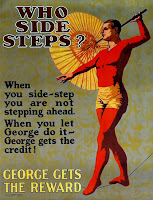 of which seem to me to have very different views of human nature. the mather posters are boosters, 'you go get'm, guys!' the bill jones ones are frequently scolding. the a.h.brand ones, which are to be found nowhere but swann's aug 3 2011 catalogue, at least not that i could find; they are elegant and kind -- more reminders than instructions. 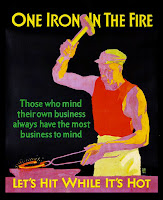 the buzza mottos are so charming. i've come across them now and then over the years, but they are only rarely photographed well enough to reproduce here. and their favorite subject is mothers. still, they are also boosters. see finsbry's flickr for more. 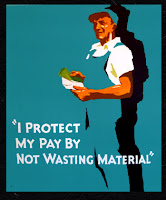 the thing is, why did they all appear at just that moment? this was the 'roaring twenties,' and a time in our history in which the separation between the rich and the poor was devastatingly vast, much like it is today. 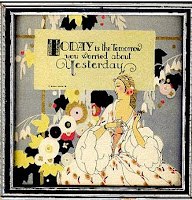 power was held by the few, and rights were being stolen from their workers. the lopsidedness toppled the economy, again, much as it has today. workers with no money in their pockets can't consume, and without consumers a business will fail. 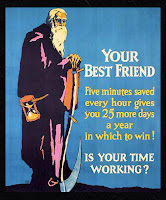 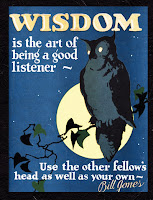 so why these posters at that moment, and what, if any- thing, can they teach us about today?
i just can't see myself clear to understand.
are they morale boosters handed out instead of power?
are they the greedy trying to squeeze just that penny more?
(if we're going to fund FEMA we have to cut social security!)

what do you think?