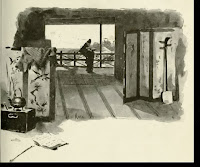 The noise of the innumerable wooden panels which at the fall of night are pulled and shut in every Japanese house, is one of the peculiarities of the country which will remain longest imprinted on my memory. From our neighbours' houses, floating to us over the green gardens, these noises reach us one after the other, in series, more or less deadened, more or less distant.

Just below us, those of Madame Prune move very badly, creak and make a hideous noise in their worn-out grooves. 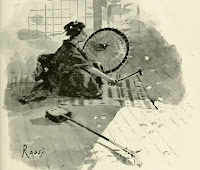 Ours are somewhat noisy too, for the old house is full of echoes, and there are at least twenty to run over long slides in order to close in completely the kind of open hall in which we live. Generally, it is Chrysantheme who undertakes this piece of household work, and a great deal of trouble it gives her, for she often pinches her fingers in the singular awkwardness of her too tiny hands, which have never been accustomed to do any work. 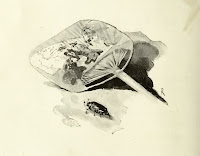 Then comes her toilette for the night. With a certain grace she lets fall the day-dress, and slips on a more simple one of blue cotton, which has the same pagoda sleeves, the same shape all but the train, and which she fastens round her waist by a sash of muslin of the same colour. 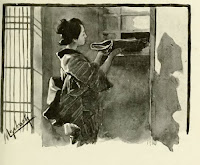 The high head-dress remains untouched, it is needless to say; all but the pins which are taken out and laid beside her in a lacquer box.

Then there is the little silver pipe that must absolutely be smoked before going to sleep; this is one of the customs which most provokes me, but has to be borne. 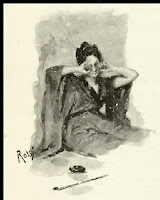 Chrysantheme, like a gipsy, squats before a particular square box, made of red wood, which contains a little tobacco jar, a little porcelain stove full of hot embers, and finally a little bamboo pot serving at the same time as ashtray and spittoon. (Madame Prune's smoking- box downstairs, and every smoking-box in Japan, both of men and women, is exactly the same, and contains precisely the same objects, arranged in precisely the same manner; and wherever it may be, whether in the house of the rich or the poor, it always lies about somewhere on the floor.) 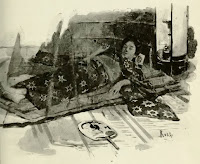 The word ''pipe" is at once too trivial and too big to be applied to this delicate silver tube, which is perfectly straight and at the end of which, in a microscopic receptacle, is placed one pinch of golden tobacco, chopped finer than silken thread.
Two puffs, or at most three; it lasts scarcely a few seconds, and the pipe is finished. Then pan, pan, pan, pan, the little tube is struck smartly against the edge of the smoking-box to knock out the ashes, which never will fall; and this tapping, heard everywhere, in every house, at every hour of the day or night, quick and droll as the scratching of a monkey, is in Japan one of the noises most characteristic of human life. 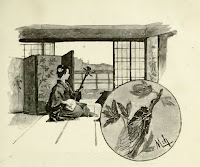 "Anata nomimase!" (You must smoke too!) says Chrysantheme.

Having again filled the vexatious little pipe, she puts the silver tube to my lips with a bow. Courtesy forbids my refusal; but I find it detestably bitter.
Now, before laying myself down under the blue mosquito-net, I open two of the panels in the room, one on the side of the silent and deserted footpath, the other one on the garden side, overlooking the terraces, so that the night air may breathe upon us, even at the risk of bringing us the company of some belated cockchafer, or more giddy moth. 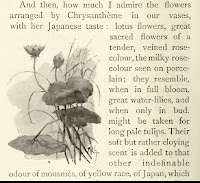 Our wooden house, with Its thin old walls, vibrates at night like a great dry fiddle; the slightest noises grow great in it, become disfigured and positively disquieting. Beneath the verandah are hung two little Æolian harps, which at the least ruffle of the breeze running through their blades of grass, emit a gentle tinkling sound, like the harmonious murmur of a brook; outside, to the very furthest limits of the distance, the cicalas continue their great and everlasting concert; over our heads, on the black roof, is heard passing like a witch's sabbath, the raging battle to the death of cats, rats and owls. 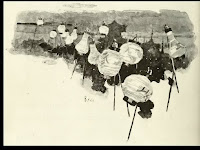 Presently, when in the early dawn, a fresher breeze, mounting upwards from the sea and the deep harbour, reaches us, Chrysantheme will slyly get up and shut the panels I have opened. Before that, however, she will have risen at least three times to smoke: having yawned like a cat, stretched herself, twisted in every direction her little amber arms, and her graceful little hands, she sits up resolutely, with all the waking groans and half words of a child, pretty and fascinating enough; then she emerges from the gauze tent, fills her little pipe, and breathes a few puffs of the bitter and unpleasant mixture. 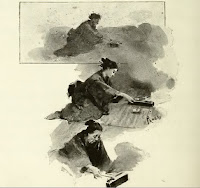 Then comes pan, pan, pan, pan, against the box to shake out the ashes. In the resounding sonority of the night it makes quite a terrible noise, which wakes Madame Prune. This is fatal. Madame Prune is at once seized also with a longing to smoke which may not be denied; then, to the noise from above, comes an answering pan pan pan from below, exactly like it, exasperating and inevitable as an echo.

(i was delighted to find this whole thing online. there are bits of narration and illustration which are absolutely charming. the story itself is troubling, but the book, i think, is quite worth the time.)

It likes both to enter
and to leave,
actions it seems to feel as a kind of hide-and-seek.
It knows nothing of
what the cloth believes
of its magus-like powers.

If fastening and unfastening
are its nature,
it doesn’t care about its nature.

It likes the caress of two fingers
against its slightly
thickened edges.
It likes the scent and heat
of the proximate body.
The exhilaration of the washing
is its wild pleasure.

Amoralist, sensualist, dependent of cotton thread,
its sleep is curled like a cat to a patch of sun,
calico and round.
Its understanding is the understanding
of honey and jasmine, of letting what happens come.

A button envies no
neighboring button,
no snap, no knot, no polyester-braided toggle.
It rests on its red-checked shirt
in serene disregard.

It is its own story, completed.

Brevity and longevity mean nothing to a button carved of horn.

Nor do old dreams of passion
disturb it,
though once it wandered the
ten thousand grasses
with the musk-fragrance
caught in its nostrils;
though once it followed—it did, I tell you—that wind for miles.

Satsuma-ware is classified in the "ceramics" category, that is, products made of fired clay. The original techniques were actually Korean, but after Japan’s invasion of Korea in 1598, Shimaza Yoshiro, lord of the Satsuma Province, brought back Korean artisans for the purpose of developing his own ceramic industry. Manufacture was continuous until the 1960s, with the secrets of the craft passed from generation to generation. However, the artisans became fewer, and their children moved away or lost interest in maintaining the family traditions, until the art became extinct. 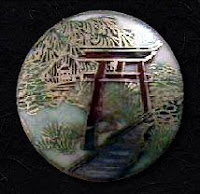 Since the Japanese wore no buttons, none were made until export trade with the West was established. This occurred by treaty in 1868, fifteen years after Admiral Perry was allowed to anchor his ship in Tokyo harbor and begin negotiations. Japanese ceramics became popularized at the Vienna Exposition in 1873, and it was probably not until this time or shortly thereafter that the first Satsuma buttons were made. In fact, many were probably made not in Satsuma Province, but in Kyoto, from whence they were sent to Tokyo for hand-decorating and export. 1 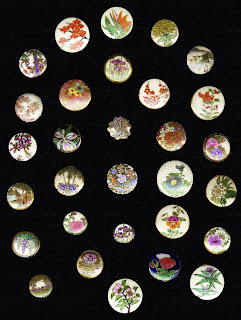 & lots of ebay: here and here and many more.

posted by lotusgreen at 6:07 PM 6 comments