from THE TALES OF ISE (Ise Monogatari)

In the past, there was a prince known as Prince Koretaka. He had a palace at a place called Minase, on the far side of Yamazaki. Every year when the cherry blossoms were in full bloom, he went to that palace. On those occasions he always took along a person who was the director of the right imperial stables. It was long ago and I have forgotten his name.

Not enthusiastic about hunting, they just drank saké continuously and turned to composing poems in Japanese. The cherry blossoms at the Nagisa residence in Katano, where they often hunted, were especially beautiful. They dismounted under the trees, and breaking off blossoms to decorate themselves, everyone, of high, middle, and low rank, composed poems. The director of the stables composed this:
If only this world
were without cherry blossoms
then would our hearts
be at ease
in springtime. 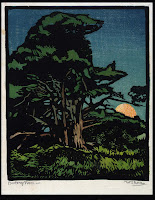 Another person composed this:

It is because they fall soon
that the cherry blossoms
are so admired.
What can stay long
in this fleeting world?

When they left the trees to return to Minase, it already was dark. The prince's attendants came from the fields with servants bringing the saké. Seeking out a good place to drink it, they came to a place called Amanokawa. The director of the stables gave the prince a cup of saké. The prince said, “When you hand me the cup, compose a poem on coming to the banks of Amanokawa after hunting at Katano.” The director of the stables composed this and handed it to him:
I've spent the day hunting
and now will seek lodging
from the Weaver Maid
for I have come
to the River of Heaven.

The prince recited this over and over but could not come up with a response. Ki no Aritsune was attending the prince. He responded:
She who waits patiently
for a lord who comes
but once a year
will not, I am sure,
lodge any other.

They went back to Minase, and the prince entered his palace. They drank and conversed until deep in the night, and then the prince prepared to sleep, somewhat drunk. As the moon of the eleventh day of the month began to sink behind the mountains, the director of the stables composed this:
How can the moon
hide itself
before we are satisfied?
I wish the mountain rim would flee
so the moon might stay in view. 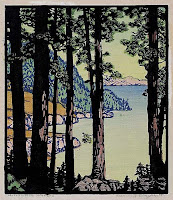 In place of the prince, Ki no Aritsune replied:
I wish the peaks
one and all
might be leveled:
if there were no mountain rims
the moon would not hide.

posted by lotusgreen at 7:26 PM 5 comments

the poplar did it

i have finally figured everything out, the reason for the differences in japanese writing and art and that of the west. it's the trees.

i'm looking at these book covers, the ceramics, the prints and paintings, in this movement we call japonisme, and i see a pattern; you see it too. it's kind of amazing and overwhelming if you have never come across this before.

and beautiful. and when we look at it we see 'japonisme.' the outlines, the simplicity, the blocks of color, the asymmetry, the focus on nature.... 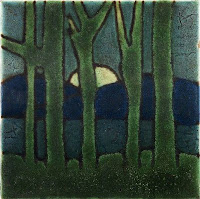 some pottery firms featured this style to a greater degree than others. though grueby manufactured many styles of ceramics, this 'through the woods' view, perhaps these tiles were their signature. 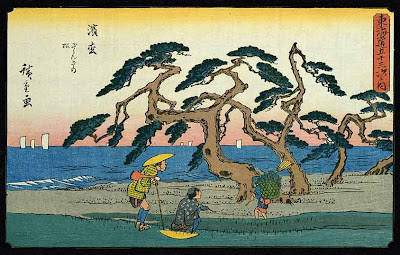 but then.... you look at japanese images and the trees are all wiggly! does that mean your understanding of japonisme is all wrong??! where then does the inspiration come from?

not that the japanese don't have their verticals. there's always bamboo.

in fact, japan does have some straight trees.

and they have a strong artistic tradition of vertical counterpoint to diagonal. 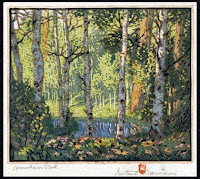 but in general, you see trees in japanese prints, and you do not see straight trees. in western ones, you do. i was probing my mind as to a possibility for this discrepancy when suddenly it was so clear. 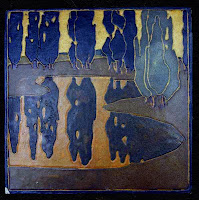 japan's trees are wiggly. western trees are straight. (i'm talking pines in particular, but not exclusively.) and is it so difficult to imagine that the nature sur- rounding the human will inform all communications of that human? our letterforms are straight; theirs is not. linear v non-linear. does this very simply describe it all?

send in the clowns


CLOWNS: speakers of the truth; trickster -- creator of the world; defenders against the evil spirits.

i've looked at clowns from both sides now
from fools to frights and still somehow
it's clowns illusions i recall --
i really don't know clowns at all. 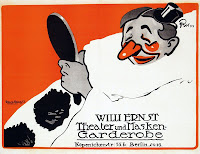 What kind of man is this?
An empty shell--
A lonely cell in which
an empty heart must dwell

Why can't I fall in love
Like any other man
And maybe then I'll know
what kind of fool I am.

What kind of clown am I?
What do I know of life?
Why can't I cast away the mask of play
and live my life?

Stop the World, I Want to Get Off